Heart Attack And The Hidden Secrets For Survival

Heart disease is the number one killer all over the world, with 80% of the deaths happening in the developing countries, India being one of them. Immediate care within the first hour of cardiac emergencies is crucial, with almost 50% deaths happening during this period, mostly due to unawareness and lack of timely care. 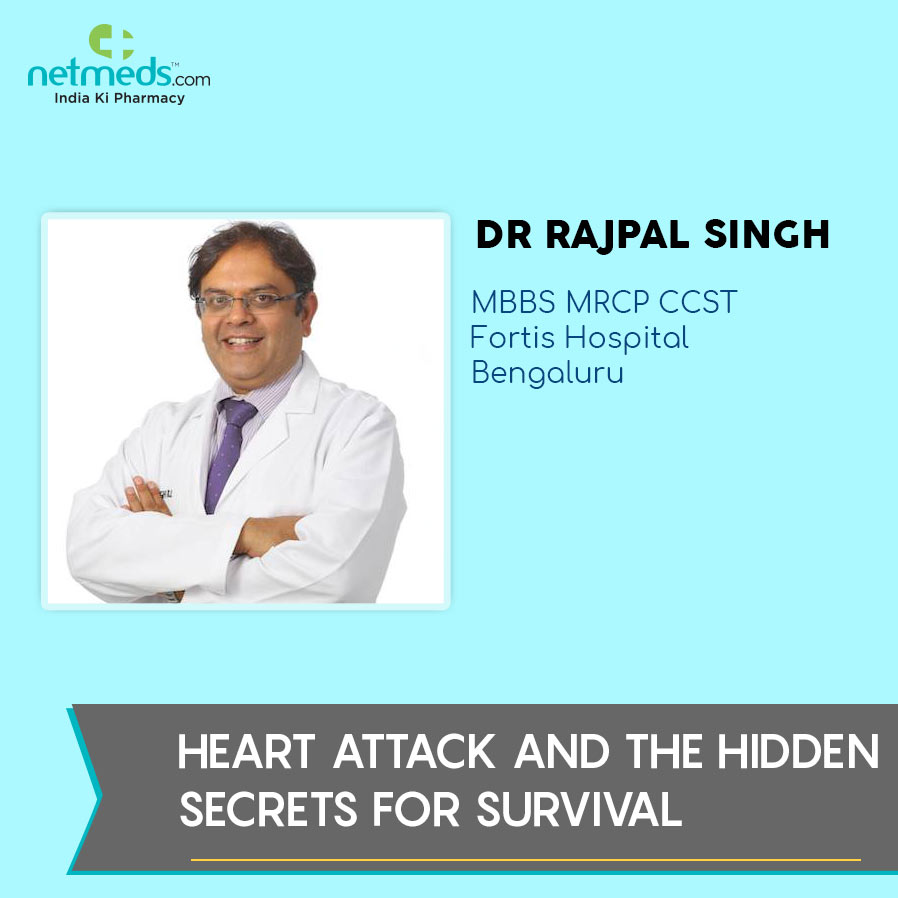 What Happens During An Attack?

The heart is constantly working, purifying blood and ensuring that a continuous supply of it reaches all vital parts of the body.

An erratic lifestyle and unhealthy food habits increase the risk of developing progressive narrowing of the arteries, puts a huge strain on the heart, the culmination of which is a heart attack.

Myths About The Disease

In India, heart disease very often results in fatalities. Most people are unaware of what to do in the face of a cardiac emergency and the immediate reaction is panic and distress, resulting in loss of precious time. A majority of the population is also in denial of the fact that they could fall victim to it, believing one or all of these common myths.

In India, because of the widespread belief that heart attacks only happen to men, women often neglect their health and rarely go for check-ups. The result is that cardiac disease goes undetected for a long time and is only diagnosed once it has progressed to an advanced stage. However, this is a totally unfounded myth because according to the World Health Organisation and the Centre for Disease Prevention and Control statistics, women are as likely to get a heart attack as men and are just as susceptible to cardiac problems. In India, nearly 30% of patients having heart attacks are women, particularly those who are obese, post-menopausal and diabetic.

Heart attack has many symptoms, chest pain being only one of them. It includes pain in the chest area as well as in the jaw, shoulder, back and even abdomen. You may also have an uneasy bloated feeling that is often mistaken for a symptom of gastritis. In fact, 7 out of 10 who walk into the hospital complaining of chest pain actually turn out to actually be suffering from a heart attack.

Most people are under the impression that heart attack only strikes people of a certain age, leading a particular kind of lifestyle. However, whilst it is true that obesity, diabetes, bad food habits, hypertension and other such factors increase the risk of heart disease, even people without any of these can fall prey to heart attacks.

No, this is not the treatment, bypass surgery is done for stable patients and not for patients presenting with an acute heart attack. This is because an open-heart surgery in an acute attack increases the risk of death and other complications significantly. However, bypass surgery can be done after “resting period” of at least a week and following the advice of the cardiologist.

Heart attack can happen to anyone, irrespective of age, lifestyle and health. However, the risk of getting one increases greatly according to the following factors.

Tests To Determine The Heart's Condition

The ECG records the rhythm and electrical activity in the heart. In case of heart attack this test will diagnose the changes that occur when there is a blood clot in one or more of the coronary arteries in the heart.

Separate tests may be carried in order to measure the levels of glucose and cholesterol in the body as well.

This test is carried out when a heart attack is suspected, to measure the levels of an enzyme called Troponin. This enzyme, released only when heart muscles are damaged, helps ascertain whether or not the muscles have been injured and if yes, to what extent. When elevated, this is a strong predictor of increased risk of death and further damage and should not be ignored.

This is the ultrasound scan of the heart. It is a non-invasive procedure that can reveal how the heart muscles have been affected.

This is an ECG that is carried out while walking on a treadmill or performing other exercise. The speed of the treadmill is increased every three minutes and the heart rate, rhythm and blood pressure is recorded in order to determine whether the symptoms experienced are caused due to Angina (chest pain caused due to cardiac issues) or not. This should not be undertaken if patient has chest pain on minimal exertion or whilst resting.

It is a “Gold standard” diagnostic procedure that is carried out to check for abnormalities in the arteries like blockages and clots. It helps the doctors identify the location and extent of the blockage

After a heart attack the first thing that needs to be done is restore the blood flow to the heart muscles as quickly as possible. An ECG is done to assess the damage done to the heart, and blood thinning tablets are given once it is established that the patient has suffered an attack. The blocks in the arteries can be removed through various medical procedures like Thrombolysis and Primary Angioplasty.

This procedure dissolves clots in the artery by administering intravenous medication but is effective only when the heart attack is diagnosed in the early stages. The maximum benefit is observed in those who present within the “golden hour”, i.e. from onset of chest pain. Therefore, the benefit of medication reduces with passage of time.

In most cases, it also does not remove blockage completely, partially dissolving the clots, leaving the fatty plaque intact. Chances of a recurrence are therefore high. Some patients may be allergic to thrombolytic drugs and sometimes, the artery may fail to open even after being administered drugs. The current guidelines recommend that patients who receive thrombolysis should undergo coronary angiogram within 24hrs of thrombolysis. This will help to determine if the plaque requires further stabilization by means of angioplasty or interval bypass surgery.

This is the “gold standard” treatment for patients who miss the golden hour period. There are significant benefits from this modality of treatment particularly in the risk of reduction of risk of death and stroke. Known as the best and most successful treatment for heart attacks, it is the process through which blocks in the arteries are removed in order to restore blood flow through them. It is a non-surgical method that has been proven to reduce shortness of breath, relieve chest pain and improve the flow of blood, if administered within 90 minutes of the onset of heart attack. The patient may be sent home within three to five days depending on his condition, after being monitored in the ICU. Usually, a few weeks of rest is advised before routine activities can be resumed.