Sarcoidosis is an inflammatory disorder in which large clusters of inflammatory cells known as granulomas arise in several organs within the body – most commonly in the lungs, lymph nodes and at times, also in the heart, liver, brain, skin, eyes. Also designated as Besnier-Boeck-Schaumann Disease eponymously after the three dermatologists and medical researchers who studied the origins and pathology of this disorder, sarcoidosis is a chronic condition that has no cure. However, in most instances, it only presents with minor symptoms that tend to subside on their own, but on certain occasions, the inflammation can intensify and lead to severe organ damage and failure. 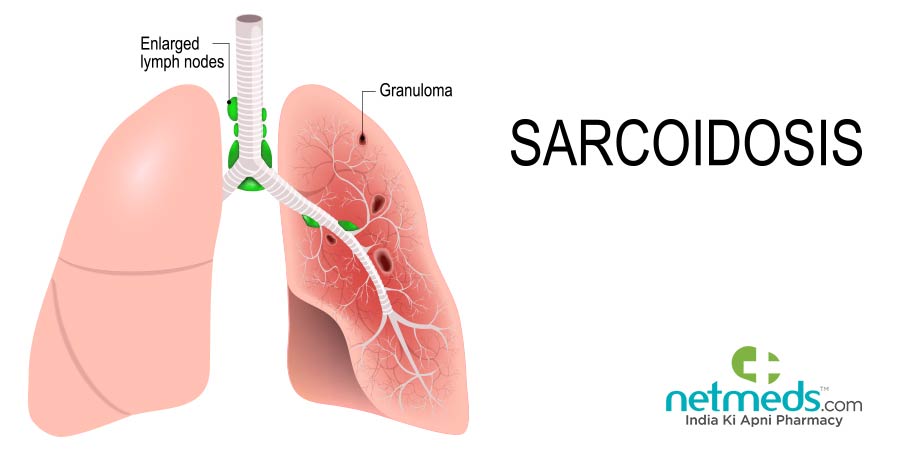 The precise aspects that induce sarcoidosis are yet to be determined by scientists and medical experts. However, doctors ascertain the most likely reasons to be genetic aberrations occurring in the system of the affected individuals that are instigated by numerous microbial pathogens and atmospheric toxins. These consist of viruses, bacteria, as well as environmental pollutants including dust, noxious gases, grime, chemical emissions, air particles.

When these abnormal gene displacements happen, the immune system begins to respond in an irregular manner by being hyperactive and forming an aggregation of immune cells i.e. granulomas within the body. These inflammatory lumps eventually hamper organ functions as they continue to proliferate and become larger in size.

Certain attributes make an individual more prone to acquiring sarcoidosis, such as:

Gender And Age: Though men can also be afflicted by sarcoidosis, the condition tends to arise more often in women. Additionally, people between the ages of 20 to 60 are at higher risk of sarcoidosis than very young to much older populations.

The indications of sarcoidosis differ based on which organs in the body are impeded by the growth of granulomas. The signs might present suddenly in some people and fade away on their own, while in others, the abnormal cell clusters emerge slowly and prolong for months together or sometimes even years, prompting severe symptoms.

The frequently occurring symptoms of sarcoidosis comprise joint pain and swelling, extreme levels of exhaustion and body weakness, swollen lymph nodes like in lymphoma and loss of weight.

Symptoms In The Lungs:

When sarcoidosis develops in the lungs, it leads to continuous coughing which is often dry, with chest discomfort, breathing difficulty, excess fluid accumulation in the pulmonary tissues like in pleural effusion and wheezing.

Symptoms In The Skin:

In the dermal tissues, granuloma growths can prompt red protuberances in the ankles, discolouration of the skin with prominently darker or lighter areas, dents and gashes in the face.

Symptoms In The Heart:

Sarcoidosis in the heart triggers pain in the chest along with abnormally paced heartbeats i.e. arrhythmia, palpitations, besides fatigue and surplus accrual of fluid in the cardiac tissues leading to oedema.

Symptoms In The Eyes:

Granulomas can obstruct eyesight to a significant extent and give rise to various signs such as hazy vision, redness in the eyes with heightened sensitivity to bright lights, dry eyes and pain in the visual organs.

The diagnosis of sarcoidosis is challenging since, in the majority of cases, no obvious symptoms arise. Furthermore, when certain warning signs of granuloma growths do occur, they resemble other ailments of the lungs, lymph nodes, heart, skin, eyes and hence make it difficult to conclude an instance of sarcoidosis.

A series of assays are performed to determine if the patient has sarcoidosis, including:

Treatment for sarcoidosis depends upon the severity of symptoms and which organs are most affected by the abnormal proliferation of granulomas. In most instances, sarcoidosis symptoms are very minor or no discomforting signs are experienced and the condition diminishes by itself without any medications or therapies. However, if indications are grave and impede the functioning of organs, then prescription medicines are given by the doctor which are anti-inflammatory drugs that lessen swelling, granuloma growths and restrain anomalous immune system reactions.

To alleviate muscle stiffness and joint pain, physical therapy is given, which improves mobility and overall productivity. In rare cases of organ failure of the heart, lungs, liver, organ transplant surgery is carried out, to help restore normal functions of the body.