Menstruation, commonly known as a woman's periods, is the regular release of mucosal tissue & blood from the inner lining of the uterus. Up to 80% of women report some warning signs in the time leading to menstruation. Acne, tender breasts, bloating, feeling tired, tender breasts, food cravings, fatigue, irritability, and depression are symptoms of menstruation, and are termed as Premenstrual Syndrome (PMS) when they interfere with daily living activities. 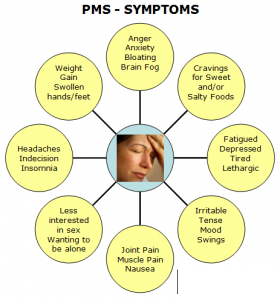 Around 20% to 30% of women have moderate symptoms of PMS, while 3% to 8% have severe symptoms. The more severe form of PMS is known as Premenstrual Dysphoric Disorder (PMDD) with greater psychological symptoms, affects an estimated 3% to 8% of premenstrual women.

The physical and emotional symptoms of Premenstrual Syndrome need to occur consistently over a period of several months after ovulation and before menstruation and need to be severe enough to interfere with daily living activities and tasks for a case of PMS to be diagnosed.

Many women may experience only a few of the potential symptoms:

The causes of Premenstrual Syndrome aren't known, though several factors may contribute to PMS:

No laboratory tests or unique physical findings can determine a diagnosis of PMS, excepting a consistent appearance of 3 factors:

For a diagnosis of Premenstrual Dysphoric Disorder, a woman & her gynaecologist must record her PMS symptoms over a period of several months.

While dietary supplements such as calcium, vitamin B6, and vitamin E are recommended to reduce PMS & PMDD symptoms, some doctors recommend exercise to alleviate symptoms.

Anti-depressants such as fluoxetine, sertraline, paroxetine, and citalopram are prescribed continually or during the ovulation stage depending on the severity of the symptoms.