Osteoporosis: Are You At Risk?

Osteoporosis, from the Greek word, "porous bones," is a disease of the bone where bone density decreases and greater than normal bone loss occurs. The bones become abnormally porous that is compressible, like a sponge. This condition causes the bones to become weak & brittle, so much so that even mild stresses like bending over or coughing can cause a fracture. Men and women of all races are at risk of Osteoporosis, but post-menopausal women are at higher risk with white and Asian women at even higher risk. 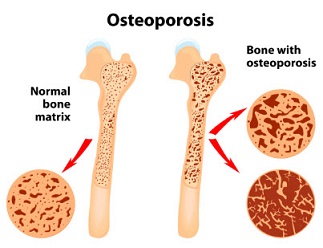 There are few early warning signs of osteoporosis. Typically, back pain, caused by a fractured or collapsed vertebra, loss of height over time, a stooped posture, bones that fracture much more easily than expected are the signs that osteoporosis has already developed.

The latest results from an Icelandic study indicate that the risk of a second major osteoporotic fracture occurring after a first one is likely to be three times higher in the first year after the initial event. Even 10 years later, the risk of a second fracture remains twice as high, and became 41% higher for women than it was for men.

The bone fracture can be either be a crack, i. e., hip fracture or a collapse, i. e., compression fracture of the spinal vertebrae. Common areas of bone fractures due to osteoporosis are the hips, spine, ribs, and wrists.

Band -like pain radiating from the back to the sides of the body signal fractures of the vertebrae. Repeated spinal fractures cause chronic lower back pain, along with loss of height and/or curving of the spine due to vertebral collapse. This is turn give individuals suffering from osteoporosis a hunched- appearance, often called a "dowager hump" as it was frequently seen in elderly women.

The likelihood of developing Osteoporosis depends on how much bone mass was accumulated during a person's youth. The higher the peak bone mass is, the more bone there is for your skeletal structure to depend on and that much less likely to develop osteoporosis as a person ages.

There are 3 factors in keeping bones healthy:

Indians can get our daily Calcium requirements by consuming:

Between 200 to 300 mgs of low-fat dairy products in a single serving;

Soy beans and by- products, and Calcium-fortified foods, such as cereals and orange juice.

Take Calcium supplements after consulting with your doctor as too much calcium may cause heart problems & kidney stones.

Improves your body's ability to absorb Calcium. People in tropical and equatorial regions absorb Vitamin D through sunlight.  People confined indoors or those who regularly use sunscreen or avoid the sun entirely may not be absorbing enough Vitamin D through their skin. Doctors prescribe 600 to 800 international units (IU) a day, through food or supplements in such cases.

Helps build strong bones, slow bone loss, and benefits bones no matter when a person starts to exercise. The benefits of exercise are higher when you start exercising regularly at a young age and continue throughout life.

Weight-bearing exercises such as: