Male Breast Cancer can be defined as the proliferation of cancer cells in the breast tissue of men. Unlike the common stigma that breast cancer happens only in women, it is diagnosed in men as well, in the little amount of breast tissue they have. Although it can occur at any age, this type of cancer is usually noticed at an older age. Also Read: Breast Cancer: Causes, Symptoms And Treatment

Generally, the breast tissue in an adult man is similar to the breast tissue of a young girl before she hits puberty. However, in girls, the breast tissue gradually develops whereas in men it stops. This is one reason that any lump or suspicious tissue hardening goes unnoticed in men and in most cases, breast cancer in men gets diagnosed at a much later stage. But unlike breast cancer in women, cancer of the milk-producing glands or the parts that are involved in the production of milk is quite rare in men. Also Read: World Breast Cancer Month: Debunking 5 Common Breast Cancer Myths 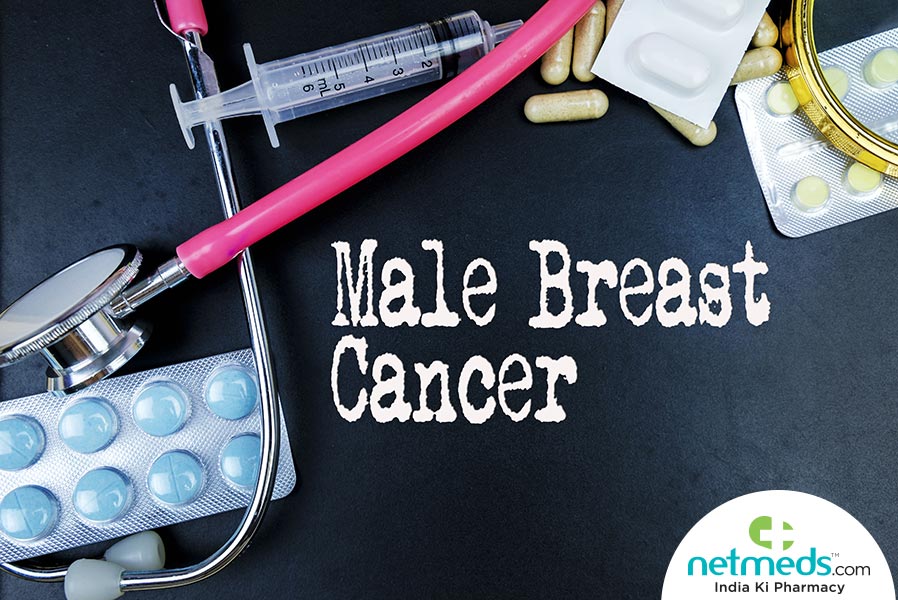 There are three common types of breast cancer noticed in men:

Lobular Carcinoma: This is a rare type of male breast cancer and usually begins in the milk-producing glands or the few lobules that men have in their breast tissue.

Although just like any other type of cancer, the exact cause of breast cancer in men is still undiscovered, yet most researches show that it usually occurs due to abnormal multiplication of some of the breast cells more than the healthier ones. These cells spread and divide rapidly without dying and accumulate to form tumorous structures. These tumors metastasize and may spread to nearby tissues, lymph nodes and other parts of the body.

Some causative factors that increase the risk of breast cancer include:

Age: The risk of breast cancer is most often diagnosed in men in their 60s.

Medications: Medications used for hormone-therapy or drugs related to estrogen aggravates the risk of breast cancer in men.

Family History: A person having a family history of breast cancer is more prone to having it.

Genetic Factor: Boys having Klinefelter’s syndrome, a condition where a person is born with more than one copy of the X chromosome is more at risk of getting breast cancer. This condition causes abnormal development of the testicles which leads to lower levels of male hormone (i.e. androgens) and high concentration of female hormone (i.e. estrogens).

Liver Disease: Certain liver problems like cirrhosis of the liver can cause a reduction in the levels of male hormone in the body and increase female hormones ultimately leading to male breast cancer.

Obesity: Quite often even obesity increases estrogen in the male body and reduces testosterone and hence increases the risk of male breast cancer.

Although the symptoms are similar to that of women, the common signs and symptoms of breast cancer include:

If the cancer is not diagnosed on time, it might gradually spread to other parts of the body and cause severe symptoms including:

On noticing any of the above-mentioned signs and symptoms, do consult a doctor right away to start the treatment at the earliest. The doctor usually does a thorough physical checkup by looking for any lumps or unusual hardening at the breast. The doctor then acknowledges the patient’s family history and past medical history to know about the exact causative factor and may perform some diagnostics including:

Treatment options usually depend upon the extent of spreading of the cancerous cells and includes: