Body mass index, or BMI, has been used for over 100 years to help health professionals decide whether a patient is overweight or underweight. It is also used in population studies, by doctors, personal trainers, and others. There were some studies which reflected the true effect of BMI on health, because early stages of some illness, as well as health-damaging behaviours such as cigarette smoking and other factors, can lead to both lower BMI and increased risk of death. 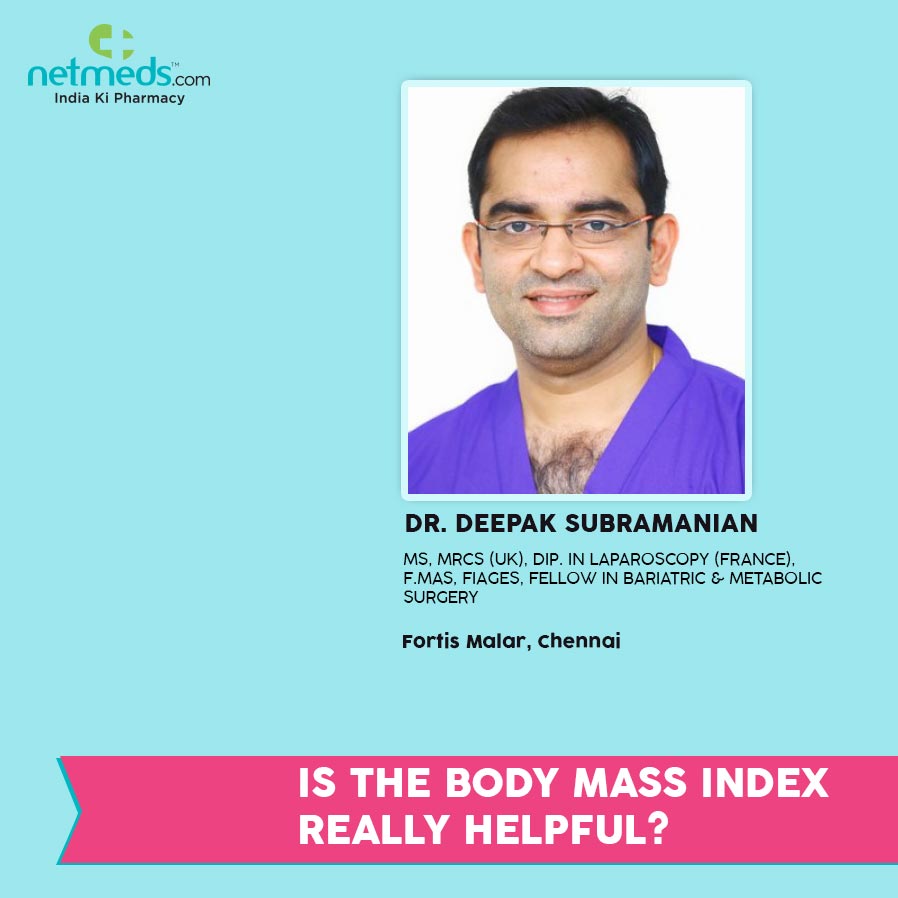 However, one cannot completely rely on the BMI value. For example, it does not measure the overall fat or the lean tissue (muscle) content. BMI is an inexpensive alternative to direct measurements of body fat, such as underwater weighing, but it is only one of many factors that you and your health-care provider should use in evaluating your health status.

While BMI can provide an accurate snapshot of weight trends across a population, it can also be inaccurate for certain individuals. Bodybuilders, for example, are often classified as overweight or obese because muscle is denser than fat and they tend to have more muscle than other people. Gender, age and ethnicity affect a person’s body composition and fat percentage and thus BMI may seem ambiguous but at the same BMI, older adults tend to have more fat than younger adults; black people tend to have more fat than white people; and a woman is likely to have more body fat than a man.

This however, doesn’t mean that a tall woman with low body fat couldn’t have the same BMI as a shorter, heavier man. Thus, a well-built person can also have a high BMI while an obese person will have a low BMI, therefore BMI doesn’t give the full picture of one’s health.

Doctors and health professionals use BMI along with your medical history to determine whether you are overweight or obese. They would need to take factors such as medical history, body fat percentage, muscle-to-fat ratio and overall fitness and diet into account. According to research, it has been stated that nearly half of the people classified as overweight or obese are actually healthy when other factors are taken into account.

It’s also found out that one of the most important benefits of BMI is how accurately it correlates with certain health risks. As your BMI rises above 21, your risk of developing heart disease, type 2 diabetes and other chronic illnesses increases progressively. The prevalence of diabetes is increasing globally, but the situation is particularly alarming in Asia. Thus, it is evident that, for the same BMI, Asian populations have a higher prevalence of diabetes than the other western countries as studies also showed that Asians have increased risk for cardiovascular diseases and diabetes mellitus at relatively low BMI levels.

It is also important to monitor your weight as you grow older as your metabolism slows down. Obesity has been linked to serious side effects like diabetes and cancer, and now there’s a chance that those with a higher BMI are more likely to develop dementia too. As higher body mass index (BMI) in middle age could be a warning sign of dementia decades down the road.

Nowadays with Smartphones on every hand of an individual starting from children to elderly people there’s an increased risk of higher body mass index, warns a recent study. After surveying parents about their kids’ technology and sleep habits, it has been found that using technology before bed was associated with poorer sleep quality, more fatigue in the morning and also among children who watched TV or used their cell phones before bed leads to higher body mass indexes (BMI). Thus, it’s really important to maintain a healthy weight as it could control your BMI later in life, so invest in your well-being by eating a nutritious diet, getting an appropriate amount of sleep, and exercising regularly rather than going for a quick fix or bad diets.

Although calculating one’s BMI index neither proves nor disproves that one is of a healthy weight, but still BMI serves as a benchmark of one’s physical being. So, it should never be considered on its own as an accurate assessment of one’s physical health but BMI can get a person to start thinking about his or her own physical health in a more or less empirical manner. And for that, BMI serves a definitive purpose.

He can be consulted from 9 am to 5 pm at Fortis Malar, Chennai