Influenza (mostly referred to as “flu”) is a contagious viral infection caused primarily by the influenza virus A or B. Influenza viruses are among the most common causes of human respiratory infections occurring worldwide considerably associated with a high morbidity and mortality.

The influenza A virus, in particular, has a specific ability to undergo periodic changes in its antigens. Major changes in these antigens are termed “antigenic shifts”, and minor changes are termed “antigenic drifts”. Antigenic shifts are associated with the epidemics and pandemics of influenza A, whereas antigenic drifts are responsible for more localized outbreaks of varying extent. Apart from the changing antigenic properties of this virus, the transmissibility power of the virus and the susceptibility of the population influence the epidemiological pattern.

Epidemics of flu happen annually during autumn and winter in temperate areas the virus is transmitted from person to person with respiratory droplets produced when the patient coughs or sneezes. In India, peaks of influenza are observed during the months of July-September coinciding with monsoon in Northern India and in October-November in Southern India. 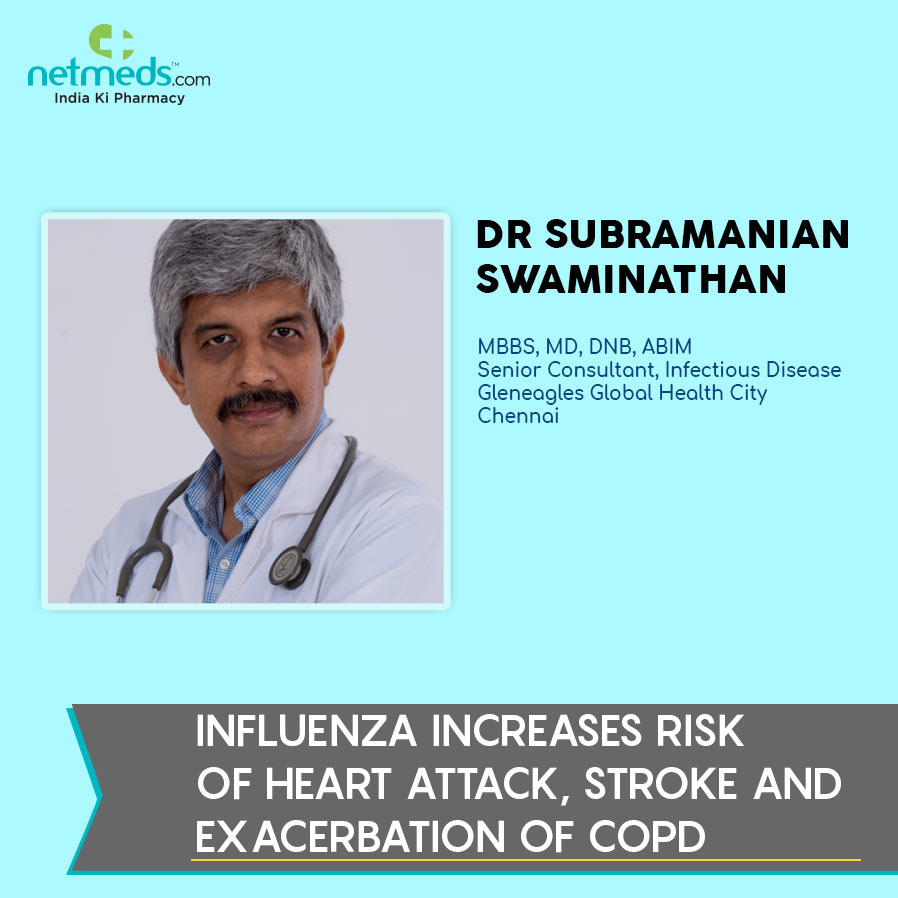 Influenza usually has the highest attack rates among young people; however, mortality and morbidity are specifically high in those with definite high-risk medical conditions—including extreme of ages, cardiovascular diseases, pregnancy and metabolic diseases such as diabetes mellitus. Alarmingly, studies now show that influenza increases the risk of heart attack and stroke in the 3 days following infection and also cause frequent exacerbation of chronic obstructive pulmonary disease.

The most important and common complication of influenza is pneumonia. In addition to its respiratory effects, the virus can exert effects on other body systems.

The majority of influenza cases are diagnosed by their clinical manifestations. Given the self-limiting nature of the disease in otherwise healthy individuals, there is no need for diagnostic tests in all presenting cases. Diagnostic tests should be conducted if the results of the test are thought to be able to influence treatment like decisions on the initiation of specific antiviral treatment, antibiotic treatment decision-making, and infection control practices.

Due to the limitation in other diagnostic modalities in influenza detection, molecular assays based on the PCR amplification method are considered the gold standard diagnostic method for the detection of the influenza virus. These tests are available in standardized laboratories across the country.

Influenza is usually of acute onset following an incubation period of 1 to 2 days. A close contact of < 1 meter is frequently needed for a person to get infected from the primary case, though it can also spread through contact with infected objects.

Primarily, patients present with systemic symptoms like fever, chills, headache, severe myalgia, malaise, and anorexia and mostly accompanied by respiratory symptoms like dry cough, nasal discharge, and sore throat. The illness is so abrupt in onset that, the patient can remember the precise onset of the disease. In the early days, fever is of high-grade and after day 3, decreases & diminishes gradually. The disease lasts for an average of 4 to 8 days. Often, the patient has a plethoric face with watery and red eyes. A convalescent period of some weeks may ensue, during which dry cough and malaise are the most salient complaints of the patient.

The most important strategy for the prevention of influenza and its severe outcomes is annual vaccination against seasonal influenza.  Based on the seasonal pattern in India, the best time for offering vaccine for individuals residing in southern states would be just before the onset of rainy season, i.e. before October while for rest of the country, it should be before June.

Irrespectively, Flu vaccine can be administered at any time of the year in all high-risk groups.

Influenza epidemics and pandemics impose a heavy socioeconomic burden on all societies. Its impact has led to fundamental changes in public health and health care systems, including centralized and consolidated health care, greater recognition of the role of socioeconomics in health, and the coordination of public health at national and global levels.

Although it is impossible to predict when the next pandemic might occur, its occurrence is considered inevitable, and it could well occur even earlier. Given the increased economic globalization, urbanization and mobility, the next pandemic will spread further and faster, and could lead to significant disruptions.