‘I learnt to live without a stomach’: A cancer survivor shares his inspiring story

The first Sunday of June is observed as National Survivor’s Day and we bring you the story of Dr Amitava Ghosh, Associate Professor at IIT Madras on how he fought with Adenocarcinoma in the gastroesophageal junction. 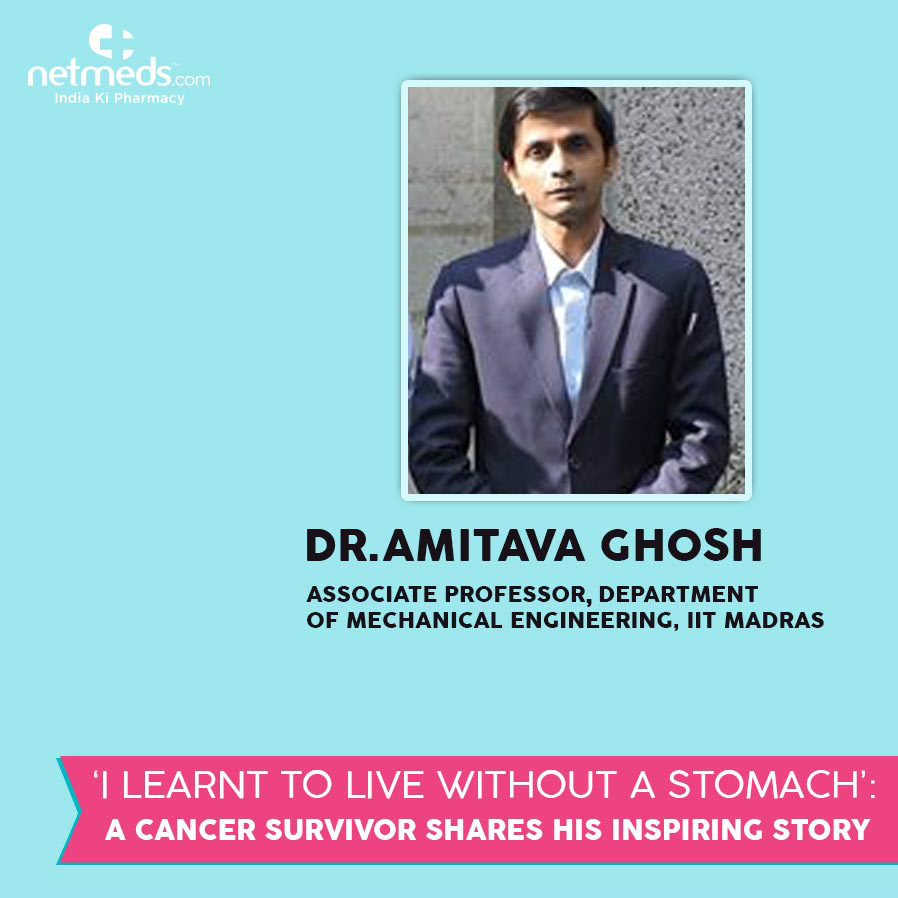 It all started in July 2013. I was visiting a Gastroenterologist for my wife Monal’s consultation. During our conversation, I happened to mention my problems like acidity and other small tummy issues like constipation. He put me on regular medicines and I had to leave abroad for a conference.

The acidity issue didn’t settle down. After I came back, we visited him again and my wife insisted on me getting an endoscopy and a colonoscopy done. Doctor assured us it was a regular procedure. While colonoscopy came out normal, the doctor unfortunately found a small lesion at the gastroesophageal junction and sent the sample for biopsy. The results came out positive and I was referred for a PET- CT.

Unfortunately, it not only confirmed the presence of cancer cells but also revealed that it had already spread to stomach. My fight with world’s most deadly disease started right at that moment. I was referred to Dr Sankar Srinivasan, medical oncologist with Apollo Hospitals.

And Yes! There was a good news at that moment in my family. My wife was confirmed two months pregnant and that gave me enough courage to fight the disease with much determination for the sake of my child.

After completing chemotherapy and radiation sessions, I underwent another PET - CT which revealed that I was cancer-free. My happiness didn’t last long. My doctor revealed that I needed to be operated and my whole stomach had to be removed.

I protested, but my team of doctors convinced me to get it done as it would help in stopping the recurrence of cancer. I listened to them and underwent surgery.

Living without stomach was very challenging initially. The doctors merged the ends of esophagus and intestines together which means the food I consume directly travels into the intestines. I had to eat small portions, multiple times, sip on very little water. The human body is a wonderful machine and I was amazed at the way my body slowly started adapting to the changes. It took almost a year-and-half to get used to it and the due process made a stronger person to face various challenging surprises that come our way.

And today, I mastered the art of living without a stomach and I am proud of what I have achieved so far with great discipline and determination. There are millions of people around the world like me, leading regular and normal lifestyle, enjoying their successful professional and personal lives.

Two weeks after my surgery, my wife safely delivered our baby boy Arka Prava. My only regret was not being with her during her delivery. Throughout my struggle, she stood by me like a rock. Arka is our bright sunshine and my wife continued with her further studies. An MSc in Chemistry and a B.Ed, she recently started working in a school as a teacher.

Nothing has changed before and after cancer in my life but perspective towards life has grown more positive.

Dr Amitava Ghosh is an Associate Professor in the Department of Mechanical Engineering, IIT Madras