Dengue On the Rise: How To Avoid And Treatment Options

Dengue fever is a mosquito-borne disease that occurs in tropical and subtropical areas in the world. 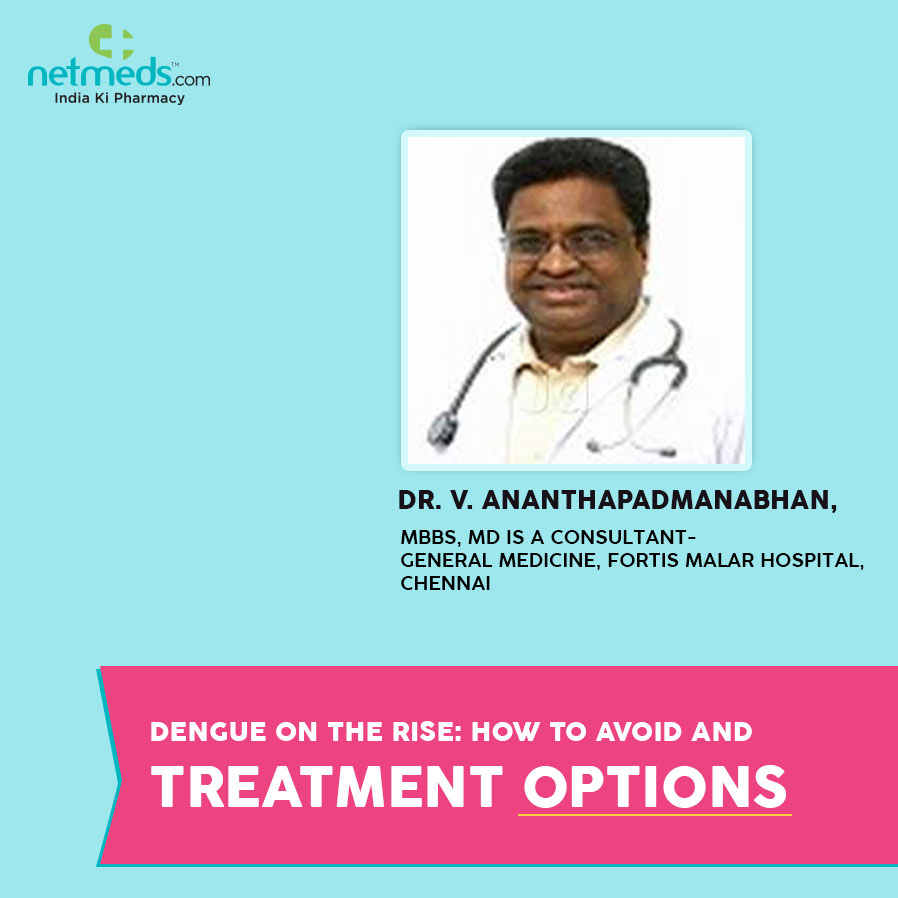 It is caused by any one of four types of dengue virus, which is transmitted by the bite of an infected female Aedes aegypti mosquito.

The most common symptoms of dengue include high fever, runny nose, a mild skin rash, cough, and pain behind the eyes and in the joints. However, some people may develop a red and white patchy skin rash followed by loss of appetite, nausea, vomiting, etc. A severe form of dengue fever, also called dengue hemorrhagic fever can cause severe bleeding, a sudden drop in blood pressure (shock) and death.

With dengue sting getting sharper and millions of cases of dengue infection occurring worldwide each year, the city has rose to extreme panic and outbreak. According to International guidelines, unless a patient’s platelet count is below 10,000, and there is spontaneous, active bleeding, no platelet transfusion is required.

Platelet deficiency is not the primary cause of death in people suffering from Dengue. However, what most people do not realize is that the first line of treatment for dengue is not platelet transfusion. It in fact, does more harm than good if used in a patient whose counts are over 10,000.

An estimated 390 million dengue infections occur worldwide each year, with about 96 million resulting in illness. If you contract dengue fever, symptoms usually begin about four to seven days after the initial infection. There are many cases where symptoms might be mild and may be mistaken for symptoms of the flu or another infection. Young children and people who have never experienced infection may have a milder illness than older children and adults.

Symptoms generally last for about 10 days and can include, sudden, high fever (up to 106 degrees Fahrenheit), severe headache, swollen lymph glands, severe joint and muscle pains, skin rash (appearing between two and five days after the initial fever), mild to severe nausea, mild to severe vomiting, mild bleeding from the nose or gums, mild bruising on the skin, febrile convulsions.

Doctors use blood tests to check for viral antibodies or the presence of infection. If you experience dengue symptoms after travelling outside the country or if you develop a fever and milder symptoms common to dengue fever, you should see a health care provider to check if you are infected and not ignore it.

The risk of complications of Dengue is in less than 1% and if warning signals are known to the public, all deaths from dengue can be avoided. Dengue has evolved as a global life-threatening public health concern, affecting around 2.5 billion individuals in more than 100 countries. The physician should be aware of the varied clinical manifestations of this condition and ensure an early and adequate treatment plan. The infection is difficult to diagnose without laboratory tests because dengue symptoms may initially resemble those of other diseases like chikungunya.

The following are the two primary types of testing available:

PCR test that detects the presence of the virus itself is generally considered the most reliable means of diagnosis. A positive result from a PCR is considered conclusive. A negative result on a PCR test may indicate that no infection is present or that the level of virus is too low to detect, as may happen if the test was performed after the 7-day window during which the virus is present in the sample collected for this test. A negative PCR result is followed by antibody testing (below).

Antibody tests may be reported as positive or negative or may be reported as an antibody titer with an interpretation of which type(s) of antibody (IgG or IgM) is present. Positive IgM and IgG tests for dengue antibodies detected in an initial blood sample mean that it is likely that the person became infected with dengue virus within recent weeks. IgM antibody tests can be positive if a person has been infected with a similar virus, such as chikungunya (called cross-reaction). If an initial IgM antibody test is positive, a second test called the Plaque Reduction Neutralization Test (PRNT) is used to confirm the presence of antibodies to dengue virus and to help rule out other viral infections.

There is no medication or treatment specifically for dengue infection. If you believe you are infected with dengue, you should use over-the-counter pain relievers to reduce your fever, headache, and joint pain. Patients suffering from dengue should seek medical advice, rest and drink plenty of fluids. Paracetamol can be taken to bring down fever and reduce joint pains. However, aspirin or ibuprofen should not be taken since they can increase the risk of bleeding. If you feel worse after the first 24 hours of illness—once your fever has gone down—you should be taken to the hospital as soon as possible to check for complications. “While treating dengue patients, physicians should remember the ‘Formula of 20' i.e. rise in pulse by more than 20; fall of BP by more than 20; difference between lower and upper BP of less than 20 and presence of more than 20 hemorrhagic spots on the arm after a tourniquet test suggest a high-risk situation and the person needs immediate medical attention.”

There is no vaccine to prevent dengue fever. However, the best way to prevent the disease is to prevent bites by infected mosquitoes, particularly if you are living in or travelling to a tropical area. This involves protecting yourself and making efforts to keep the mosquito population down.

The following steps need to be taken into consideration to protect yourself from dengue:

Stay away from heavily populated residential areas, if possible.

Use mosquito repellents, even indoors.

When indoors, use air conditioning if available.

Make sure window and door screens are secure and free of holes. If sleeping areas are not screened or air-conditioned, use mosquito nets.

If you have symptoms of dengue, speak to your doctor.

To reduce the mosquito population, get rid of places where mosquitoes can breed. These include old tires, cans, or flower pots that collect rain. Regularly change the water in outdoor birdbaths and pets' water dishes.