Acrylamide: A Potent Carcinogen Present In Overcooked And Over-Toasted Foods

Acrylamide is a potent carcinogen which is released when starchy food is over cooked and bread is over-toasted. 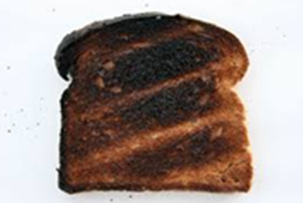 The United Kingdom's Food Safety Agency, launched a campaign 'Go for Gold', with an aim of reducing the acrylamide consumption in the food.  Acrylamide is released into the food when the food turns dark due to overcooking. Starchy foods such as potatoes when deep fried releases acrylamide.

Studies conducted in animals showed that acrylamide could damage the DNA and cause cancer.  Consumption of vegetables, fruits and whole grains reduces the exposure to acrylamide. The study may hold implications for people who rely mostly on toasted bread and food items. Having fresh vegetables and fruits, would be the best bet if these findings are true for human too.