Norepinephrine (NE), otherwise termed Noradrenaline (NA), is a vital hormone as well as a neurotransmitter that influences the activity of the central nervous system such as sleep, mood, focus and also regulates the “fight-or-flight” response in times of stressful situations, along with adrenaline. At times, while engaging in thrilling pursuits like high-octane adventure sports or watching horror movies with sudden shocking scenes, a surge of adrenaline results in a phenomenon known as adrenaline rush. Possessing a structure similar to adrenaline, noradrenaline is named thus as it translates to “at or beside the kidneys” in Latin, while norepinephrine is designated as such since it means the same in Greek. 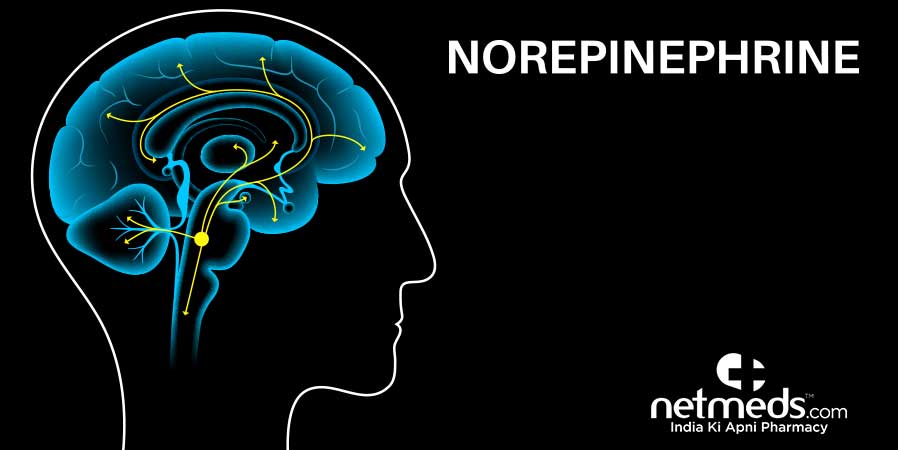 Furthermore, noradrenaline is also secreted in the interior portion of the adrenal gland known as the adrenal medulla, as a result of stress response by the sympathetic nervous system (SNS) to mediate the fight or flight activity in the body. When the body undergoes stress, the sympathetic nervous system triggers the adrenal glands to produce both adrenaline and noradrenaline, which are released into blood circulation as hormones, to enable the system to respond and move quickly and safeguard the body. Yet another hormone that functions in stress response is cortisol.

Noradrenaline And Its Structure:

Several notable scientists have contributed towards unravelling the structure and functions of the neurotransmitter-hormones involved in stress response – namely adrenaline and noradrenaline. Renowned American physician Walter Cannon first outlined the concept of homeostasis and fight-or-flight response to stress in the body and along with his colleague, reputed Mexican medical expert Arturo Rosenbleuth, revealed that two hormones were responsible for this action in the system. Various researchers then confirmed the biological mechanism of noradrenaline in the human system and also ascertained that the hormone also functioned as a neurotransmitter. Finally, it was Ulf von Euler, the distinguished pharmacologist and physiology expert from Sweden, who discovered that noradrenaline was indeed a neurotransmitter that portrayed effects on both the CNS and SNS and published his findings in the year 1945. He was awarded the prestigious Nobel Prize In Physiology Or Medicine for his work on neurotransmitters in the year 1970.

The biochemical structure of noradrenaline is fundamentally a catecholamine – an organic compound composed of a catechol hexagonal ring structure of carbon, hydrogen, oxygen. With a chemical composition closely resembling adrenaline, norepinephrine has the molecular formula C8H11NO3, with a molar mass of 169.18 g/mol (grams per mole - mole being the standard unit of atomic mass/molar mass).

Noradrenaline performs numerous key functions in the body, such as:

Since norepinephrine activates the brain and uplifts both intellectual functions and mental wellbeing, lesser than normal levels of this hormone in the body invariably affect nervous system operations.

High levels of norepinephrine instigate the brain to go into overdrive, with associated symptoms being rapid heartbeat, high blood pressure, excessive sweating, palpitations in the heart and headaches.

Ailments like anxiety, pheochromocytoma i.e. tumour on adrenal glands, chronic stress arise during higher than normal concentrations of noradrenaline in the bloodstream. It also leads to muscle cramps, irritated and angry moods, irregular sleep patterns and a decline in concentration.