YAMINI is a combination of Drospirenone and Ethinyl Estradiol which belongs to the group of medicines called Combined Oral Contraceptives. It is used to prevent pregnancy (contraception).

Both drospirenone and ethinyl estradiol are synthetic female sex hormones (estrogen and progesterone). They reduce the chances of pregnancy by suppressing the release of gonadotrophic hormones that triggers ovulation (release of a mature egg from ovaries). They also reduce the thickness of inner lining of the uterus which makes it not suitable for the foetus to implant and grow and alters the thickness of cervical mucus (a type of fluid produced by the cervix) which makes it difficult for the sperm to travel inside the uterus.

YAMINI may alter your regular monthly menstrual cycle, and so do not use rhythm or temperature methods to track ovulation, as they may not provide accurate results.

Consult your doctor before taking YAMINI if you have any liver, kidney or heart problems or are suffering from blood clots. It is strictly not recommended for use in pregnant or breastfeeding women and in women (aged above 35 years) who have the habit of smoking.

While taking YAMINI, your doctor may want to regularly monitor your health condition to avoid the risk of unwanted side effects. The most common side effects of YAMINI are unusual spotting or bleeding, nausea, breast tenderness and headache. Consult your doctor if any of these side effect worsens. Also, inform your doctor if feel extremely depressed or have thoughts of harming or killing yourself.

YAMINI acts by suppressing the release of gonadotrophic hormones that are responsible for triggering ovulation (release of a mature egg from ovaries) and for a successful implantation of the fertilized egg. They also reduce the thickness of the inner lining of uterus which makes it not suitable for the foetus to implant and grow. Additionally, they can alter the thickness of the cervical mucus which makes it difficult for the sperm to enter the uterus and fertilize the egg. As a result, they create an unfavourable environment for a successful pregnancy.

Take YAMINI strictly as advised by your physician. Swallow YAMINI with a glass of water. Do not crush or chew the medicine. YAMINI can be taken with or without meals. Try to take YAMINI at the same time each day.

Do not miss any dose of YAMINI in between the therapy, as it may reduce its effectiveness. In case if you have missed a dose of YAMINI take it as soon as you remember. Avoid taking a double dose of YAMINI to compensate the missed dose as it may lead to bleeding or spotting. Your doctor will decide the correct dose and duration of therapy for you depending upon your age, body weight and health condition.

SIDE EFFECTS OF YAMINI

Stop taking YAMINI and contact your doctor immediately if you experience any of the following side effects:

Rest and relax. Keep yourself hydrated by drinking plenty of fluids such as water or electrolytes. Applying a pain-relieving balm on your forehead can be beneficial. Do not consume excessive alcohol, as it could aggravate your headache. Consult your doctor if your headache worsens.

Take YAMINI with or just after meals. Stick to simple meals. Avoid eating oil rich or spicy foods. Consult your doctor if your nausea worsens.

YAMINI is not recommended for use in pregnant women and in women who think that they might be pregnant. It is also not recommended for use in women who have or ever had jaundice due to pregnancy. It should be used with caution in women who developed pregnancy patches (golden brown patches in face), hearing loss, porphyria, skin itching with rash and blisters or sudden movements of the body (Sydenham’s chorea) during her pregnancy or after use of certain sex hormones. Therefore, consult your doctor before taking it.

YAMINI is not recommended for use in breast-feeding women. Therefore, consult your doctor before taking it.

Do not drive or handle heavy machines if you experience dizziness, drowsiness, tiredness, or blurred vision after taking YAMINI.

YAMINI is not recommended for use in patients with kidney diseases (such as kidney failure). Therefore, consult your doctor before taking it.

YAMINI is not recommended for use in patients who have or every had liver diseases (such as liver tumours). It should be used with caution in patients with gall bladder problems. Therefore, consult your doctor before taking it.

Do not take YAMINI if you are allergic to Drospirenone or Ethinyl Estradiol.

YAMINI is not recommended for use in patients with blood clots in the lungs (pulmonary embolism). Therefore, consult your doctor before taking it.

YAMINI is not recommended for use in patients who have or ever had heart diseases (such as heart attack, stroke, angina, mini stroke, or uncontrolled high blood pressure). Therefore, consult your doctor before taking it.

YAMINI is not recommended for use if you:

Before taking YAMINI inform your doctor if you:

YAMINI should be used with caution in elderly women. Therefore, consult your doctor before taking it.

Before taking YAMINI, inform your doctor if you are taking any of the following medicine:

If you or anyone else accidentally took more YAMINI, consult your doctor immediately or visit the nearby hospital. Symptoms of overdose might include nausea, vomiting and withdrawal bleeding. Withdrawal bleeding may occur in girl children even before their first menstruation who have taken it accidentally.

Can I stop taking YAMINI once my symptoms subside?

No. Do not stop taking YAMINI unless your doctor advises you to do so, because sudden termination of YAMINI will not provide any expected results. So kindly use YAMINI as advised by the doctor.

What precautions need to be followed while taking YAMINI?

Before taking YAMINI inform your doctor if you have any family history of breast cancer or are suffering from depression. You must also inform your doctor if you have any liver, kidney or heart problems, blood clots, diabetes, high blood cholesterol or migraine headaches. Regularly monitor your health condition by periodic blood test and breast examination to avoid the risk of side effects while taking YAMINI. Never skip or miss a dose of YAMINI. Do not smoke while using YAMINI as it can increase the risk of side effects.

Is it safe to take YAMINI immediately after delivery?

Can YAMINI be used in children?

Can YAMINI be used in post-menopausal women?

YAMINI is a contraceptive pill used to prevent pregnancy. It is not intended for use in post-menopausal women.

Do YAMINI cause cancer?

Can the use of YAMINI cause unexpected bleeding?

Yes. Irregular vaginal bleeding or spotting may occur while you are taking YAMINI. Such bleeding may be temporary and usually does not indicate any serious problems. However, consult your doctor if you experience prolonged painful bleeding.

How and when should I take YAMINI?

Take YAMINI strictly as advised by your physician. Swallow YAMINI with a glass of water. YAMINI can be taken with or without meals. Try to take YAMINI at the same time each day. Do not miss any dose of YAMINI in between the therapy, as it may reduce its effectiveness.

Can YAMINI cause abortion?

YAMINI works by suppressing ovulation and fertilization which ultimately leads to menstruation at the end of the menstrual cycle. It is not capable for causing abortion.

Can the use of YAMINI cause depression?

Yes. YAMINI may make you feel depressed. This is because YAMINI works by controlling the hormones which can exerts its influence on the mood and mental health. If you feel depressed, or have thoughts of harming or killing yourself, consult your doctor immediately.

What to do if I forgot to take YAMINI?

If you have missed a dose of YAMINI, take proper safety measures such as usage of condoms to avoid pregnancy. Do not take a double dose of YAMINI to compensate the missed ones. Spotting or sudden bleeding can occur in case if you miss to take YAMINI.

Will the use of YAMINI change the length of menstrual cycle?

Yes. There are changes for sudden spotting or vaginal bleeding while taking YAMINI. But there has been no reported evidence for long menstrual cycles.

Will the use of YAMINI produce complete protection from pregnancy?

Yes. YAMINI will provide complete protection from pregnancy when all the doses are taken correctly and regularly. But, if you miss any dose of YAMINI, it will not be effective, and you may have higher chances of becoming pregnant.

Is the use of condemn necessary while using YAMINI?

No. It is not required to use condemn while taking YAMINI. But if you miss any dose of YAMINI, you should use condoms to prevent unwanted pregnancy. 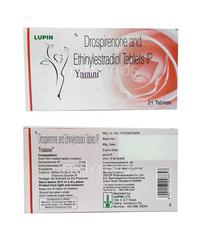