Dopamine is chemical in the brain which controls movement. This medicine helps to increase and sustain the level of dopamine in the brain. Behavioural changes such as compulsions, obsessive thoughts, addictive gambling, excessive spending, impulsive behaviour and an abnormally high sex drive or an increase in sexual thoughts or feelings have been observed in some patients taking this medication. If you observed any of those disorders, inform your doctor for advice. Always take this medicine exactly as prescribed by your doctor. Do not split, chew, or crush this medicine. Swallow the medicine whole. RASALECT 0.5MG are not recommended for use under the age of 18. The most common side effects are headache, abnormal movements (dyskinesia), decreased appetite, dry mouth, fever, allergy, nausea, vomiting and stomach pain.

Rasagiline inhibits striatal dopamine metabolism and thus providing relief from motor symptoms of Parkinson disease. It works by increasing the levels of natural substances in the brain (such as dopamine, norepinephrine, serotonin). Parkinson's disease is thought to be caused by too little dopamine in the brain.

Always take RASALECT 0.5MG exactly as prescribed by your doctor. Do not split, chew, or crush this medicine. Swallow the medicine whole.

SIDE EFFECTS OF RASALECT 0.5MG

Keep try taking this medicine with, or just after, a meal or snack and stick to simple meals and do not eat rich or spicy food.

Rest and drink plenty of fluids. Apply a cold, wet cloth or ice pack to your forehead. Rest in a quiet, comfortable, dark room.

Try to rest and relax. You can eat and drink slowly or have frequent meals. Keeping a heat pad or a covered hot water pack on your stomach may also help. If still pain persists, speak to your doctor.

RASALECT 0.5MG is not recommended for use in pregnant women unless necessary. Discuss the risks and benefits with your doctor.

RASALECT 0.5MG is not recommended for use in breastfeeding women unless necessary. Discuss the risks and benefits with your doctor.

No studies on the effects of ability to drive and use machines have been performed. Ask your doctor for advice.

Consumption of alcohol is not recommended during treatment with this medicine.

This medicine should be taken with caution in patients with severe kidney disease. Consult your doctor for advice.

This medicine should be taken with caution in patients with severe liver disease. Consult your doctor for advice.

Store at room temperature 15-25°C and keep it out of reach of children.

Can I stop RASALECT 0.5MG abruptly?

Do not stop taking this medicine all of a sudden without calling your doctor. You may have greater risk of the side effects.

What class does RASALECT 0.5MG belong to?

It belongs to a class of drugs called MAO inhibitors.

How do MAO inhibitors work?

MAO-B inhibitors decrease the normal activity of an enzyme monoamine oxidase that breaks down dopamine after it completes its activity in the brain. 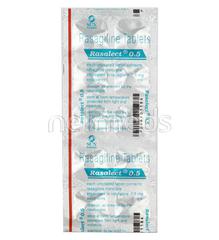