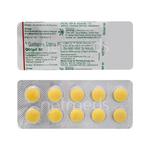 QTRIPIL 50MG contains quetiapine which belongs to a group of medicine called antipsychotics. It is used to treat several illnesses such as Bipolar depression, Mania, and Schizophrenia. Bipolar depression is a mental disorder characterized with episodes of mood swings ranging from depression to mania. Mania makes the person feel more excited, agitated and overactive or more aggressive.

Using of this medicine during the third trimester of pregnancy is not recommended since it may result in abnormal muscle movements and/or withdrawal symptoms such as agitation, feeding disorder, respiratory distress and tremor in new-borns after delivery. QTRIPIL 50MG is strictly not recommended for use in children and adolescents under 18 years. Before taking this medicine tell your doctor if you have ever had kidney disease, heart disease, liver problems. Pregnant and breastfeeding women should consult their doctor before taking this medicine.

Always take QTRIPIL 50MG exactly as your doctor has told you. This medicine must be taken with or without food and try to take at the same time each day. It should be swallowed whole with water. Do not crush or chew the medicine. Do not drink grapefruit juice while you are taking this medicine.

SIDE EFFECTS OF QTRIPIL 50MG

QTRIPIL 50MG is not recommended for use in pregnant women unless necessary. Discuss the risks and benefits with your doctor.

QTRIPIL 50MG is not recommended for use in breastfeeding women unless necessary. Discuss the risks and benefits with your doctor.

Consumption of alcohol is not recommended during treatment with QTRIPIL 50MG.

QTRIPIL 50MG should be used with caution in patients suffering from active kidney diseases. Consult your doctor for advice.

QTRIPIL 50MG should be used with caution in patients suffering from liver function impairment or active liver diseases. Consult your doctor for advice.

Do not take QTRIPIL 50MG if you are allergic (hypersensitive) to quetiapine or any other ingredients in this medicine.

QTRIPIL 50MG should be used with caution in patients suffering from active heart diseases. Consult your doctor for advice.

Is QTRIPIL 50MG a sleeping pill?

What does QTRIPIL 50MG do to the brain?

Can QTRIPIL 50MG cause Constipation? 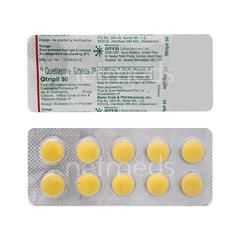