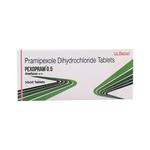 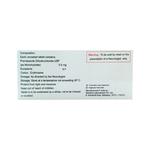 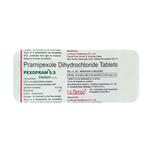 PEXOPRAM 0.5MG contain Pramipexole dihydrochloride which belongs to a group of medicine called dopamine agonists. Stimulation of the dopamine receptors triggers nerve impulses in the brain that help to control body movements. It is used to treat the symptoms of primary Parkinson’s disease in adults. It can be used alone or in combination with levodopa (another medicine for Parkinson’s disease). It works by increasing the action of dopamine, a chemical messenger that is needed to control movement in the brain.

Always take PEXOPRAM 0.5MG exactly as your doctor has told you. This medicine must be taken with or without food. The most common side effects are dizziness, nausea, hallucinations, sleeplessness (insomnia), peripheral oedema, constipation, vomiting and headache. This medicine is strictly not recommended for use in children and adolescents under 18 years. Before taking this medicine tell your doctor if you have ever had kidney disease, heart disease, liver problems. Pregnant and breastfeeding women should consult their doctor before taking this medicine.

PEXOPRAM 0.5MG works by increasing the action of dopamine, a chemical messenger that is needed to control movement in the brain.

Always take PEXOPRAM 0.5MG exactly as your doctor has told you. This medicine must be taken with or without food. Try to take this medicine at the same time each day. It should be swallowed whole with water. Do not crush or chew the medicine.

SIDE EFFECTS OF PEXOPRAM 0.5MG

PEXOPRAM 0.5MG is not recommended for use in pregnant women unless necessary. Discuss the risks and benefits with your doctor.

PEXOPRAM 0.5MG is not recommended for use in breastfeeding women unless necessary. Discuss the risks and benefits with your doctor.

Consumption of alcohol is not recommended during treatment with PEXOPRAM 0.5MG.

PEXOPRAM 0.5MG should be used with caution in patients suffering from active kidney diseases. Consult your doctor for advice.

PEXOPRAM 0.5MG should be used with caution in patients suffering from liver function impairment or active liver diseases.

Do not take PEXOPRAM 0.5MG if you are allergic (hypersensitive) to Pramipexole dihydrochloride or any other ingredients in this medicine.

Is PEXOPRAM 0.5MG a muscle relaxant?

Does PEXOPRAM 0.5MG make you sleepy?

Can I take PEXOPRAM 0.5MG during breast feeding? 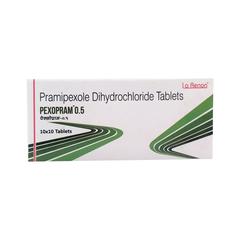