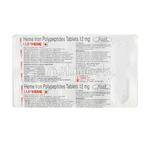 Lupiheme Tablet is an iron supplement which is used to treat low levels of iron in the body in conditions such as anaemia. It contains haem iron polypeptide as an active ingredient which replaces the low iron stores in the body.

Haem iron polypeptide gets absorbed easily in the body and encourages the formation of new red blood cells. It plays a vital role in the synthesis of haemoglobin (red pigment in the blood that acts as an oxygen carrier) in red blood cells. This in turn increases oxygen transportation to the body.

Always take Lupiheme Tablet as advised by your doctor. Do not chew or crush the tablet, swallow it with a glass of water. Do not exceed the daily recommended dosage. Contact your doctor if you experience any allergic reactions while taking it.

SIDE EFFECTS OF LUPIHEME 12MG TABLET

Lupiheme Tablet may cause constipation, diarrhoea, nausea, upset stomach or abdominal cramps. Consult with your doctor if you experience any such side effects while taking it.

Q: What is the best time to take Lupiheme Tablet?

A: You can take Lupiheme Tablets on an empty stomach because iron is absorbed the best on an empty stomach. Yet, iron supplements can cause nausea, diarrhoea, or stomach cramps, in some individuals. To avoid this problem, you may take it with a small amount of food.

Q: What precautions shall I take while taking Lupiheme Tablet?

A: Milk, calcium and antacids should not be taken at the same time as Lupiheme Tablet. You should wait at least 2 hours after having such foods before taking your supplement.

A: Yes. Lupiheme Tablet may increase your energy levels as it increases the transportation of oxygen throughout the body thus allowing all the tissues and cells to receive optimal blood and oxygen.

Q: How long should I take Lupiheme Tablet?

Q: Can Lupiheme Tablets be given to pregnant and breastfeeding women?

A: Lupiheme Tablet should be used with caution in pregnant and lactating women. Consult your doctor for advice before taking it 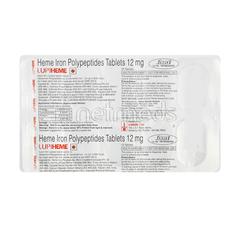