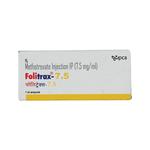 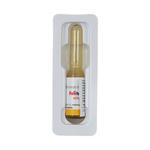 Rheumatoid arthritis is an autoimmune and inflammatory disease, which means that your immune system attacks healthy cells in your body by mistake, causing inflammation (painful swelling) in the affected parts of the body. Psoriasis is a skin condition characterized by itchy scales, that is not responsive to conventional treatment such as phototherapy and retinoids. Crohn’s disease is an inflammatory disease affecting intestine.

Also, FOLITRAX 7.5MG INJECTION is not recommended for the children less than the age of 3, pregnant and nursing women, women planning pregnancy, those who drink huge amount of alcohol and patients suffering from liver and kidney impairment.

It is used to treat:

FOLITRAX 7.5MG INJECTION contains Methotrexate is a disease-modifying antirheumatic drug (DMARDs) which interferes with the growth of those cells in the body that reproduce quickly. As a result, growth of those cells gets retarded thus serving as an anti-tumour agent. Also, FOLITRAX 7.5MG INJECTION decreases the undesired reactions of the body’s own immune-defence mechanism, thereby working as an effective immunosuppressant. In addition, it also exhibits anti-inflammatory effects, thereby reducing the pain, swelling and redness. As a result, FOLITRAX 7.5MG INJECTION treats and resolves the symptoms associated with diseases such as rheumatoid arthritis and psoriasis.

FOLITRAX 7.5MG INJECTION will be administered to you into a muscle (intramuscularly) only by a doctor or a nurse. Your doctor will administer the correct dose and duration for you depending upon your age, body weight and disease condition.

SIDE EFFECTS OF FOLITRAX 7.5MG INJECTION

Stop receiving FOLITRAX 7.5MG INJECTION and consult your doctor immediately if you experience any of the following:

Stay hydrated and take rest as much possible. Stay away from bright lights and loud sounds. Apply a pain-relieving balm on forehead. If headache persists or worsens, consult your doctor.

Take adequate amount of rest and sleep. Stay hydrated and replenish yourself with electrolytes. Also, do not indulge in driving and using heavy machinery as it may prove to be dangerous.

Stick to simple meals. Avoid eating heavily rich or spicy food. Drink oral rehydration solution to compensate for the loss of water and minerals. Stay hydrated. Consult your doctor if it persists for long or worsens with time.

Stick to simple meals. Avoid eating heavily rich or spicy food. Stay hydrated. Consult your doctor if it persists for long or worsens with time.

FOLITRAX 7.5MG INJECTION is not recommended for use if you:

Before receiving FOLITRAX 7.5MG INJECTION, inform your doctor if you:

Before receiving FOLITRAX 7.5MG INJECTION, inform your doctor if you are taking any of the following medicine:

B. Drug - Food Interactions:
It is recommended to avoid the consumption of drinks containing caffeine such as black tea, coffee, soft drinks to prevent dehydration.

Overdosage:
FOLITRAX 7.5MG INJECTION will be administered only by a doctor or nurse in a hospital, and so it is unlikely to receive an overdose, contact your doctor immediately. However, if you experience any unusual symptoms like easy tendency to bruise or bleed, nausea, vomiting, feeling unusual weakness, along with development of mouth sores, black or bloody stools, coughing up blood and vomit that looks like coffee grounds, decreased urination.

What is FOLITRAX 7.5MG INJECTION used for?

FOLITRAX 7.5MG INJECTION contains Methotrexate which belongs to the group of medicines called Antimetabolites. It is used to treat active rheumatoid arthritis in adults. It is also used to treat its polyarthritic forms (characterized by the involvement of five or more joints) which is severe, active and idiopathic in nature and affects young people (Juvenile Idiopathic Arthritis – JIA). FOLITRAX 7.5MG INJECTION is also used to treat psoriasis, which is a skin condition characterized by itchy scales, that is not responsive to conventional treatment such as phototherapy and retinoids.

Can I receive FOLITRAX 7.5MG INJECTION in pregnancy?

Can I receive FOLITRAX 7.5MG INJECTION if I am breast feeding?

Can FOLITRAX 7.5MG INJECTION be received by children?

Can FOLITRAX 7.5MG INJECTION be used by elderly?

Is there any specific food to avoid while receiving FOLITRAX 7.5MG INJECTION?

It is recommended to avoid the consumption of drinks containing caffeine such as black tea, coffee, soft drinks along with FOLITRAX 7.5MG INJECTION to prevent dehydration.

Directions to use
This medicine will be administered by a doctor or nurse. 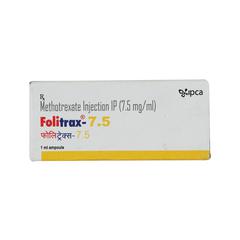