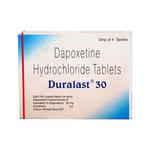 DURALAST 30MG contains Dapoxetine which belongs to a group of medicines called selective serotonin reuptake inhibitors (SSRIs) which is also known as urological medicine. It is used to treat premature ejaculation in men above 18 to 64 years of age. Premature ejaculation (PE) is a condition when a man ejaculates with little sexual stimulation and before the man wants. It is characterized by a lack of voluntary control over ejaculation that interferes with optimal sexual or psychological well-being in either partner.

Take DURALAST 30MG according to the dose and frequency as advised by your doctor. Swallow it as a whole. Before taking this medicine, tell your doctor if you have or had heart problems, depression, mania, epilepsy (seizure disorder or fits), liver or kidney disease and glaucoma. This medicine is not recommended for children and adolescents below 18 years of age. Do not drink grapefruit juice prior to taking this medicine. The common side effects are dizziness or nausea.

DURALAST 30MG is a selective serotonin reuptake inhibitor (SSRI) which increases the level of serotonin in the nervous system to increase the time taken to ejaculate and improve control over ejaculation.

Take DURALAST 30MG according to the dose and frequency as advised by your doctor. Swallow it as a whole. Do not chew, crush or break the medicine. It may be taken with or without food. Do not take more than once a day.

SIDE EFFECTS OF DURALAST 30MG

Consumption of alcohol is not recommended during treatment with DURALAST 30MG. It may cause dizziness or sleepiness.

DURALAST 30MG should be used with caution in patients suffering from active kidney diseases. Consult your doctor for advice.

DURALAST 30MG is not recommended in patients with active liver diseases. Before taking, discuss the risks and benefits with your doctor.

DURALAST 30MG is not recommended in patients with active heart diseases. Discuss the risks and benefits with your doctor.

What does DURALAST 30MG do?

It is effective if used for the right indication at prescribed dose and duration as instructed by the physician. 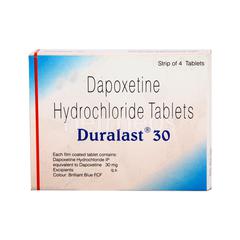