Vitamin B1 or as chemically termed thiamin or thiamine is a water-soluble vitamin and one of the eight vitamins of the B-complex. Termed as the “morale vitamin”, the essential nutrients in thiamine play a pivotal role in maintaining a healthy nervous system and promoting cardiac health.

Vitamin B1 is a colourless organo-sulphur compound that is soluble in water and transported throughout the body by dissolving in the blood. It is not produced inside the human body and needs to be taken in the form of dietary food options or as supplements.

It facilitates the body in breaking down food i.e. complex carbohydrates into simple forms of sugar i.e. glucose, fats and proteins which in turn provides energy for carrying out various bodily activities.

Thiamine was the first vitamin to be discovered in the year 1897. Initially, thiamine was named as "aneurin" (for anti-neuritic vitamin). Later, it was termed as Thiamine or “thio” or “sulphur-containing” vitamins and was first synthesized by dutch chemists Barend Coenraad Petrus Jansen and Willem Frederik Donath in the year 1936. 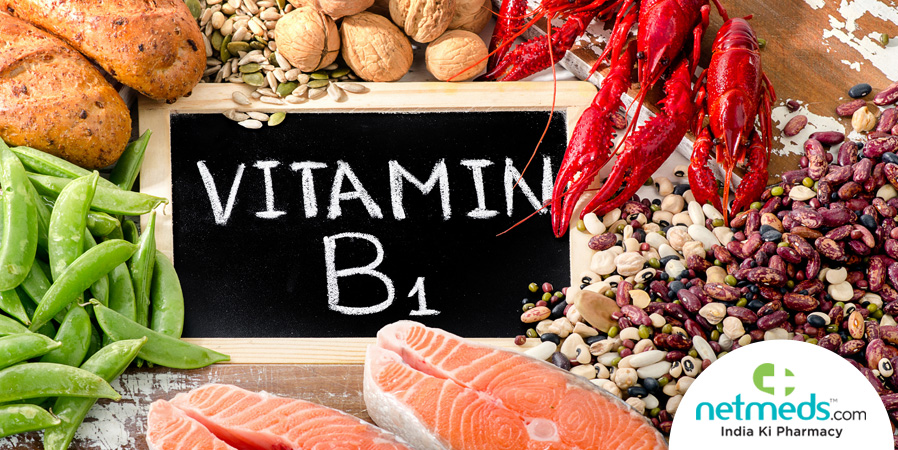 Being a potent antioxidant and neural compound, thiamine plays a significant role in treating a myriad of ailments and their complications including the brain, nervous system, muscles, heart and stomach.

Thiamine is generally taken by people to alleviate the risks and symptoms of thiamine deficiency like beriberi, pellagra, inflammation of the nerves outside the brain or peripheral neuritis.

Thiamine shots or injections are also given to patients suffering from a coma or those who are terminally ill. It is also a potent remedy for people who have been diagnosed with maple syrup urine disease and Leigh’s disease.

Known as the anti-stress hormone, it alleviates stress and improves the body’s ability to withstand high levels of stress. It is also useful in enhancing learning abilities in children and adults and increasing stamina.

Thiamine or Vitamin B1 is quintessential for improving the functions of the cardiovascular system, since a deficiency of it can often lead to congestive heart failure. Studies and research show that intake of foods rich in vitamin B1 or taking vitamin B1 supplements have greatly improved heart functions, normalized the blood pressure and even prevented chronic conditions like heart block, stroke, heart attack etc.

The supplements and foods containing thiamine are also found to be extremely effective in improving the gastrointestinal system and treating conditions like diarrhoea, Crohn’s disease and ulcerative colitis. It also helps in the secretion of hydrochloric acid, which improves digestion and ultimately enhances the appetite.

Vitamin B1 acts as a natural antioxidant and thus fortifies the body from harmful free radical damage. It is highly significant in rejuvenating the skin, and arresting the various signs of ageing like wrinkles, fine lines, spots, dark circles etc. to give way to spotless, blemish-free complexion.

The morale vitamin is extremely vital for the healthy functioning of the body. Unlike vitamins A, D, E and K, this water-soluble vitamin cannot be produced by the body, hence to fulfil the dietary needs one has to strictly depend on external food sources and supplements. And much to our respite, Mother Nature has blessed us with a bountiful amount of natural food sources laden with vitamin B1 that suffices our daily requirements.

Following are the food sources high in vitamin B1:

Fruits like oranges and dairy products like yoghurt, cheddar cheese and milk also contain some quantities of vitamin B1.

Some animal sources having a rich source of vitamin B1 are sea fishes like tuna, mackerel, salmon, mussels and pork and beef.

Some amount of vitamin B1 is also present in nuts like pistachio, brazil nut, macadamia nuts, pecan nuts, peanuts and in pulses and yeasts.

As heating and processing the various food sources, reduces the thiamine content in it, it is advisable to consume it raw, unprocessed or slightly cooked.

Being a potent antioxidant, this neural vitamin has a host of benefits. Although it is rare, the lack of it might lead to some deficiency syndromes involving the nervous system, heart, muscles and gastrointestinal system. It is mostly caused in humans either due to high excretion level of thiamine from the body or due low absorption of thiamine from food sources.

The various symptoms if not treated on time or left untreated can lead to severe deficiency disorders like Beriberi and several abnormalities related to the brain and neural system.

The 3 Different Types Of Beriberi Observed In Thiamine Deficient Patients Are:

This deficiency syndrome causes wasting and partial paralysis and is characterized by nerve and muscle abnormalities, a prickling sensation in the toes, a burning sensation in the feet at night, leg cramps, muscle atrophy, mental confusion, vomiting etc.

This type of deficiency mostly cause abdominal pain and is characterized by symptoms like pain, cramps, vomiting, nausea etc.

Affecting mostly children between two to six months and can be characterized by symptoms like pale skin, hoarseness, diarrhoea, oedema, vomiting, weight loss etc. It requires immediate attention and treatment as the acute form might be fatal for the infants.

Vitamin B1 is a water-soluble nutrient that gets removed from the body via urine, hence one has to follow a well-balanced diet to maintain a good supply of thiamine. It is one such essential nutrient which does not show any adverse effects when consumed through natural food sources. But it is strongly advocated to consult a doctor or physician before taking thiamine supplements along with the food.

The recommended daily allowance (RDA) of thiamin is 1.2 mg for males and 1.1 mg for females over the age of 18 years. Pregnant or breastfeeding women of any age should not consume more than 1.4 mg per day. Anything more than the mentioned limit without doctor’s consultation might cause allergic reactions like nausea, vomiting, stomach cramp and impaired consciousness and coordination.

Being a quintessential ingredient, this water-soluble vitamin is highly beneficial for a host of health benefits like maintaining a healthy nervous system and promoting cardiac health. It is also beneficial for complications and ailments related to the stomach, memory, eyes, kidney etc. Since the deficiency of this morale vitamin leads to deficiency syndromes like beriberi, Wernicke-Korsakoff syndrome. Leigh’s disease etc, hence one must undergo proper consultation with a doctor and fulfil the recommended dietary intake of thiamine.