Road Accidents In India: Prevention Is The Key To Save Many Lives

Injuries can be caused by any mishap. While certain injuries can be treated immediately, a few other unfortunate forms of damages caused to the body can cripple the patient for lifelong.

Unfortunately, injuries from any cause are an increasing and neglected worldwide crisis. In India, Road Traffic Crashes (RTCs) and falls are the two most common causes of hospitalized injuries. In Low- And Middle-Income Countries (LMICs) like India, RTCs are rising due to rapid urbanization and motorization. India’s vehicular population is 1% of the global vehicles whereas the share of road crashes is 6%.

LMICs share an unduly high burden of the world’s road crash deaths (90%). In the last few years, there has been a disheartening rise in deaths due to RTCs and it is estimated that RTCs would be the 5th most common of death by 2030 from its current 8th position.  Road traffic deaths are expected to increase by 83% in LMICs (if no major action is taken) and to decrease by 27% in high-income countries.

Injuries can cause either minor or severe body harm. The moderate and severe categories cause disability which is very difficult to quantify in terms of loss of quality of life to patient and family, the financial burden to society, loss of productivity in a lifetime and the economic down growth of a country as a result of this. 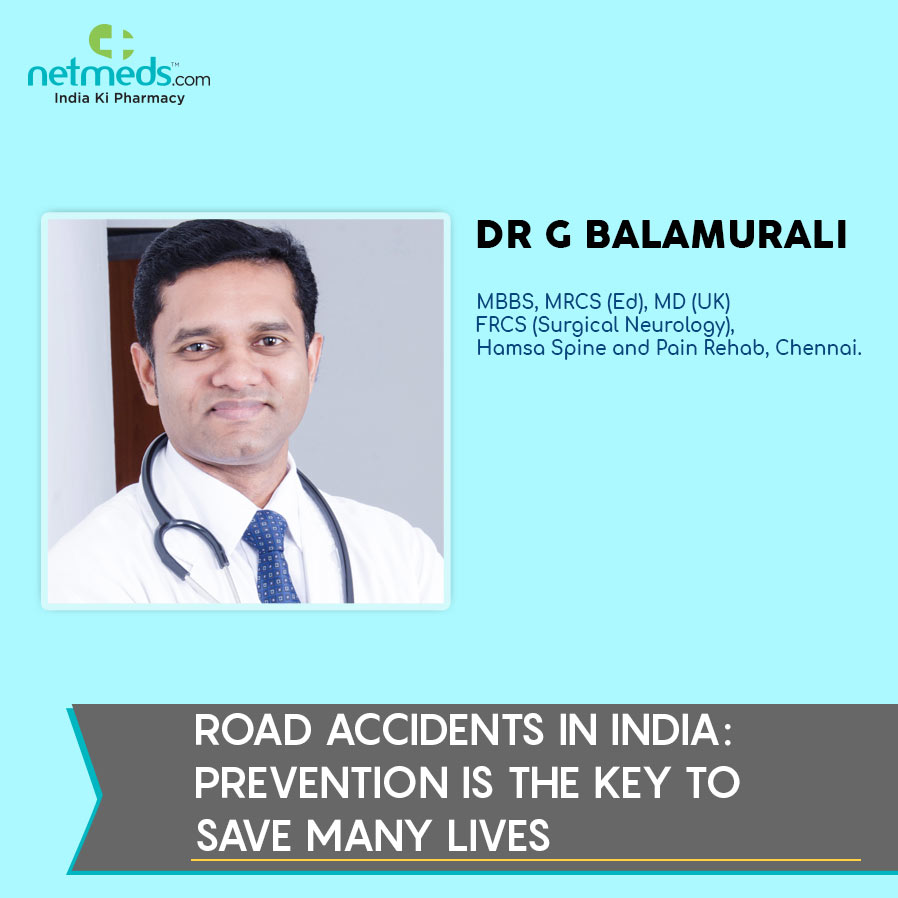 In India, the mortality rate is also very high at a rate of 1 per 8 minutes on our roads as we do not have very effective pre-hospital care. Though the 108 ambulances have improved the pre-hospital care this is still insufficient as the paramedical training is inadequate and the number of a trauma center for a given population are far less. The severe disability which happens to the low- and middle-income persons paralyzes the whole family.

Some of the worst surviving injuries to the human are Spinal Cord Injury, Traumatic Brain Injury, burns, polytrauma, amputation injuries and facial injuries including those to the eye. Even within the sub-category of spinal cord injuries (SCIs), falls have been an important cause in all LMICs. Most fall injuries take place at home and are more common in rural or semi-urban contexts. Commonest causes of falls include fall from unprotected terraces, electricity poles, stairs, trees, etc.  India needs a sustained and effective prevention program to reduce the burden.

A study conducted in 9 centres across 6 countries in the South East Asia region, falls accounted for maximum number of SCI cases i.e 52% and transport-related injury (38%) was the second most common cause for SCI.  Amongst the transport-related injuries, most (92%) occurred to the vehicle occupant i.e., driver or passenger of the vehicle. The most common type of vehicle available in the region is motorized two or three-wheeled vehicles, which was involved in 47% of the cases, followed by a light transport vehicle of four or more wheels (31%).

Studies estimate the cost of injuries as between 0.29% and 0.69% of Gross Domestic Product (GDP) of India. WHO is one of its guidance documents has estimated that RTCs costs between 1 to 1.5% of gross national product in LMICs. In a study in North India, the average out of pocket (OOP) cost per hospitalization and 1-year post-discharge was USD 1434 (1 lakh rupees). Primary prevention efforts can offer significant cost benefits, and efforts to change behavior and improve safety can and should be emphasized. There are reports that prevention programs are extremely cost-effective; nearly $3 billion dollars in health care costs could be saved in 2 years by a $10 investment per person in prevention programs. That saving jumps to $16 billion dollars in 5 years and close to $18 billion within 10 to 20 years in the USA. Community-based prevention programs are a cheaper alternative compared to emergency care to save a patient’s life.

The Christopher Reeve Foundation, a leading organization in prevention and treatment in SCI, has projected that the United States could save an estimated $400 billion dollars by providing SCI-based preventive and therapeutic interventions. Hence it is imperative that the prevention of falls and RTCs should be an important point of focus for any prevention strategy for any injury.

These injuries will not only affect the family but also the community and economy of the country as the workforce of the country could be bedridden or paralyzed. The change has to be not just in the Health And Family Welfare Department but a multi-departmental approach of improving road, vehicles, implementing rules and laws on roads, building safety and workplace regulations which are some of them to mention.

To be a safer India along with the government every citizen must put in their efforts to prevent injury by being responsible by adhering to rules and the law which are made for safety either on-road or workplace. In the next few articles, let us discuss various injuries that can cause severe disability and ways to prevent, treatment options available.

- Dr. G Balamurali is the Founder of Hamsa Spine And Brain Rehab, Chennai