A prothrombin test, often abbreviated as a PT test, is essentially a blood test that measures the amount of time it takes for the plasma to clot. Blood clotting is an inherent bodily mechanism that takes place when there is an injury or wound in the cells and tissues of the system, to prevent excess loss of blood. In a normal, healthy person, if a cut or scrape occurs in the skin, bleeding i.e. the loss of blood invariably happens. In response, a group of 12 proteins known as clotting factors/coagulation factors work in synergy to synthesize a protein called fibrin, which seals the wound and aids in ceasing blood loss as well as tissue repair. Prothrombin, also termed as clotting factor II, is a key protein amongst the coagulation factors that functions in timely blood clotting mechanisms. 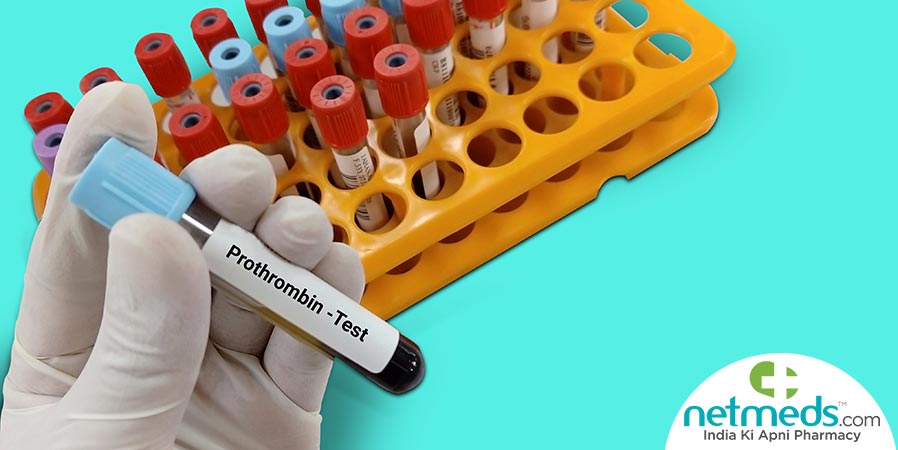 In certain instances, abnormal blood clots can occur despite no detrimental bruises, or heavy bleeding may take place even for minor cuts at a much faster pace than usual. Thus, situations or disorders that trigger signs of aberrant blood clotting, or profuse bleeding from lack of prompt coagulation require to take a prothrombin time test. While the PT test is commonly done for patients taking blood-thinning medications, it is also carried out to analyse various other blood disorders and clotting/bleeding ailments.

Why It Is Done:

The prothrombin test is performed for the following purposes:

Also Read: Pulmonary Embolism: Know The Causes, Symptoms And Treatment Of Blood Clot In The Lungs

Furthermore, irregular clotting of blood happens due to numerous reasons, such as:

Also, specific symptoms imply that a bleeding disorder may be present, such as:

While the patient does not need to fast prior to the prothrombin test, the doctor advises them to stop taking any blood-thinning medications they may be consuming for other underlying health conditions, for a few days before the PT test.

The prothrombin test is a very simple and safe procedure that is performed by a certified physician, nurse or phlebotomist in a clean environment either in a clinic or hospital. A sterile needle is inserted in the arm and blood is drawn from a vein. The entire procedure is very quick and the collected blood sample is stored under proper conditions and mixed with testing chemicals to investigate how long it takes for the clot to form in the blood plasma.

The PT test is an outpatient procedure and the patient can go back home on the same day following the protocol. They can resume normal, low-impact activities right after and post resting for a day, can carry on with their routine at work and home.

The prothrombin test is generally a safe procedure that does not pose any severe side effects. Nevertheless, if the patient is already suffering from a bleeding disorder, they have a slightly higher risk of excessive bleeding and hematoma – a condition wherein blood accrues in tissues beneath the skin.

Also, post a PT test, there may be slight side effects such as soreness, pain at the site of injection and a minor risk of infection at the puncture region. Moreover, if the patient feels dizzy or faints during or immediately after the protocol, they must be given prompt medical care at once and their vital signs must be monitored by the doctor.

In a normal, healthy person, blood plasma takes 11.5 – 13 seconds to clot, when they are not taking any blood-thinning medications. Therefore, the PT test results are expressed as a number calibrated and officially called international normalized ratio (INR).

For a patient taking blood thinners, the normal range of INR is 2 – 3.5.

When the PT test values do not fall within the normal range of INR, then the doctor determines the cause of abnormal coagulation or lack of timely blood clotting and recommends the appropriate treatment.