Hypercalcemia is a disorder, where a person has extremely high concentration of calcium in the blood. Calcium is a vital mineral required for the normal functioning of organs, cells, muscles, and nerves. It also holds a key role in maintaining bone health and blood clotting. However, excess amounts of calcium can weaken the bones, kidney stones and also interfere with heart and brain function. This condition makes it hard for the body to carry out its normal functions and very high levels of calcium can be even life-threatening.

Generally, hypercalcemia is caused as a result of overactive parathyroid glands, these glands are situated in the neck and near the thyroid gland. Some of the other causes include cancer, certain health conditions, medications, and taking excess amounts of calcium and Vitamin D supplements. 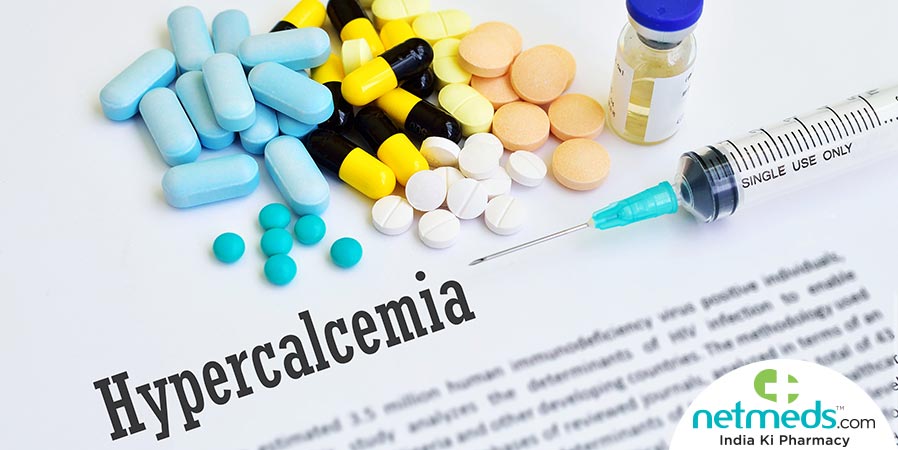 Usually, a person may not have any signs or symptoms when hypercalcemia is mild. However, more severe cases may show symptoms related to the areas of the body affected by high calcium levels in the blood which include:

Kidneys: Huge amounts of calcium makes the kidneys work harder to filter. This can lead to excessive thirst and frequent urination.

Bones And Muscles: Excess amounts of calcium in the blood gets leaked from the bones, which makes the bone fragile and weak. This can lead to bone pain and muscle weakness.

Brain: Hypercalcemia can interfere with the way the brain functions, which results in confusion, lethargy, and fatigue. It can also cause depression.

Heart: In very rare cases, severe hypercalcemia can interfere with heart function, leading to palpitation and fainting. These are signs of cardiac arrhythmia and other heart issues.

Some of the causative factors that lead to hypercalcemia include:

It is a common cause of hypercalcemia that results from small, noncancerous, or enlargement of one or more of the four parathyroid glands.

Lung cancer, breast cancer as well as some type of blood cancers can also up the risk of hypercalcemia.

Certain diseases like tuberculosis and sarcoidosis can raise blood levels of vitamin D that triggers the gastrointestinal tract to absorb more calcium.

A rare genetic disorder known as familial hypocalciuric hypercalcemia leads to the build-up of a huge amount of calcium in the blood due to faulty calcium receptors in the body.

People who have a health problem that makes them immobile can develop hypercalcemia. Over a period of time bones that don’t bear weight release calcium into the blood.

This is one of the causes of mild or transient hypercalcemia.

Taking large amounts of calcium or vitamin D supplements for a longer duration can raise calcium levels in the blood.

Generally, most people with hypercalcemia do not have any symptoms until they do routine blood tests that reveal a high level of blood calcium. Blood works can also determine whether a patient parathyroid hormone level is high indicating that a person may have hyperparathyroidism. Furthermore, the doctor may also determine whether hypercalcemia is caused by other diseases and may suggest doing imaging tests of bones or lungs.

A person may not need prompt medical treatment if they have mild hypercalcemia, however, the doctor will continue to monitor the progression of the condition, and regular follow-up is required. As, even mildly elevated hypercalcemia can lead to kidney stones and kidney damage in the long run.

The main goal of treatment for moderate to severe cases is to return calcium level to normal and prevent damages to bones and kidneys. Some of the common treatment options include

Calcitonin hormone is prescribed to slow down bone loss.

Intravenous fluids are administrated to hydrate and lower calcium levels in the blood. IV fluids and diuretics are given to treat extremely high calcium levels that can be a medical emergency to prevent heart rhythm problems or damage to the nervous system.

Corticosteroids are anti-inflammatory medications that are prescribed for treating excess amounts of vitamin D.

Loop diuretic medications can help kidneys move fluid and get rid of extra calcium, especially for a person with heart failure.

Dialysis is suggested to get rid of extra calcium and waste with damaged kidneys. This is usually done if other treatment methods aren’t working.

Surgical procedures are suggested to treat overactive parathyroid glands, where the tissue that’s causing the problem is removed. A scanning test uses an injection of a small dose of radioactive material to point out the gland or glands that are not functioning well and it is removed surgically.