Since it cannot be produced intrinsically by the bodily tissues in the system, chromium must be provided externally through diet and in very specific situations of chronic ailments, from supplements. Umpteen plant and animal foods are very rich in chromium and once ingested, the metal is present in the form of trivalent chromium ions  (Cr 3+) bound to plasma proteins, primarily transferrin. 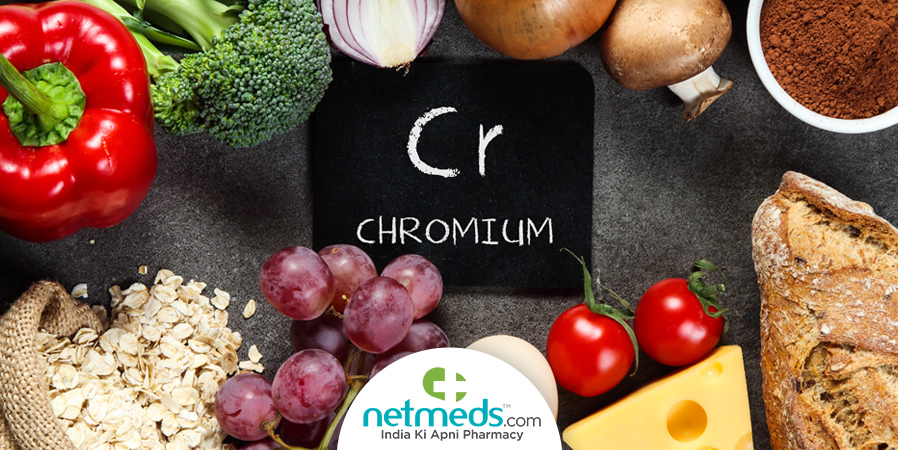 The vast majority of chromium that is ingested remains bound to proteins in the body, with only 5 % being unbound and traversing in blood circulation as free ions. Most of the bodily bound chromium is stored and concentrated in the liver, spleen, soft tissue and bone. After assimilation of required amounts of chromium, the remainder of the mineral residues is excreted via urine. Chromium, along with other trace minerals of zinc, copper and selenium displays remarkable antioxidant potential and aids in scavenging free radicals from the system, thereby safeguarding internal cells and tissues from oxidative damage.

Chromium is involved in many important biochemical roles in the human system, such as:

To guarantee maximal efficiency of biochemical reactions involving chromium, the adequate intake of the mineral is 21 – 25 mcg (micrograms) per day for adult women and children aged 9 and above. For adult men, the necessary intake is 25 – 35 mcg of chromium per day.

Numerous plant and animal foods contain profuse amounts of chromium to help meet the dietary requirements of the trace mineral. These comprise:

While dairy produce do not offer much chromium, significant quantities of this vital mineral are present in animal-based foods such as liver – beef and lamb, turkey and seafood such as mussels and other shellfish

A deficiency of chromium in human beings is very rare, since the mineral is required only in tiny amounts to ensure normal metabolism functions in the body.

However, having extremely low levels of chromium in blood circulation and tissues stores results in hampered glucose tolerance, exacerbation of symptoms in people with type 2 diabetes mellitus and increased risk of atherosclerosis, heart disease owing to poor control of cholesterol levels.

Since there is no established upper limit (UL) for chromium, instances of toxic reactions arising from surplus chromium levels in the body are very rare. However, while taking chromium supplements in the form of chromium picolinate, caution must be exercised since they can react with other prescription or over-the-counter medications and lead to grave health complications.

In addition, doctors, nutritionists and dieticians advise people of all ages to take in chromium through dietary sources and steer clear of supplements, until absolutely necessary in cases of severe mineral deficiency.