Chayote Squash, popularly known as Chow-Chow in India is a vegetable belonging to the gourd family, Cucurbitaceae. The thin skinned, big pear-shaped vegetable that goes with the botanical name Sechium edule, also referred as mirliton, pipinola, choko, originates from both Mexico and Guatemala. Though it is widely referred as a fruit, it in fact is an edible vegetable and historians believe that it was one among the several vegetables that was introduced to the Old World during Columbian exchange.

Chayote is a Spanish word, and it is known as Choko in Australia, New Zealand and Singapore. While it is referred as Christophene in United Kingdom, Ireland, it is called as Siamese Gourd in Indonesia and Malaysia. Whatever the name, there is no denying that this nutritious vegetable with super soft, succulent flesh is delectable to taste. It is one of the staple ingredients in Latin American nations and is consumed both in cooked and raw forms. While uncooked chayote is an integral part of salads or salsas in these countries, in India it is consumed as a curry, dal or kootu.

Also Read: 5 Dals That Must Be Part Of Your Daily Diet 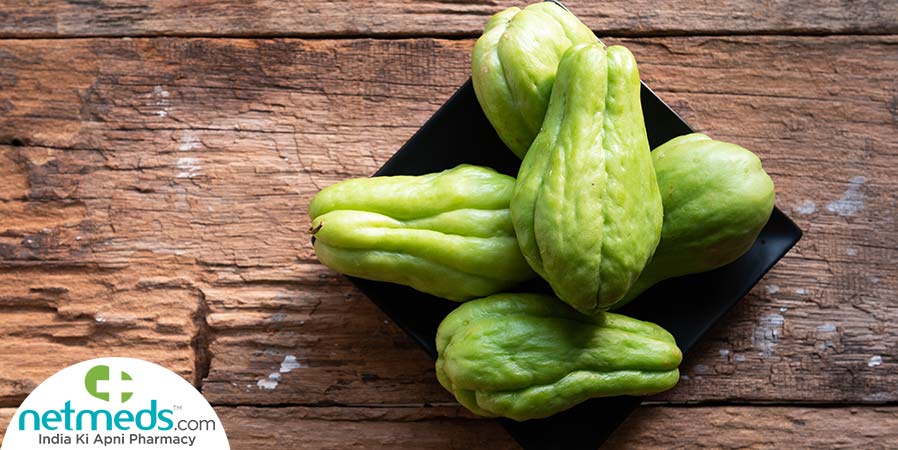 Contrary to the popular opinion that only this fruit/veggie is only edible part that grows on this climbing plant, the roots, stems, seeds and leaves can also be added to the daily diet. The vine that grows on the ground, can reach up to 12 metres sporting heart-shaped leaves which are 10-25 cm wide with tendrils on the stem. The shoots, leaves and seeds add mild flavour but great taste to the salads and stir fries.

Chayote is perhaps one of the few vegetables where its usage in various culinary cultures is very vast and extensive. It is quite interesting to note that Chow-Chow is cooked differently in every other country, often, depending on their traditional food habits.

In European countries, this bland veggie is cooked alongside beans, potatoes, corn and is served as an accompaniment to the fish dishes.

In the US, it is touted as second popular dish to be relished on holidays, especially in the states like Louisiana.

Brazilians like their Chayote either breaded or fried and add it generously to their stews, salads and soups.

In Korea, Chayote is served either pickled or in a marinated form, often as a side dish.

Chinese refer to Chayote as Buddha’s Palm and is a staple in stir-fried dishes.

Thai cuisine refers to the plant as Sayognte, meaning Miao Melon, as it grows mainly on the hilly regions of northern Thailand. The young shoots, tender leaves are added to soups and stir-fries.

We Indians too love Chayote. Bengalis ensure eating it in rainy season for fighting infections, thanks to its ample concentration of vitamin C. The young, tender leaves, branches are added to Saag, Shutko. It is referred as Chow-Chow or Maerakkai in Tamil Nadu and is staple in sambar, poriyal, kootu, dal or even a chutney.

It is called as Seema Badanekaayi in Karnataka and Seema Vankaaya or Bengaluru Vankaaya in Telugu and is served as a curry. 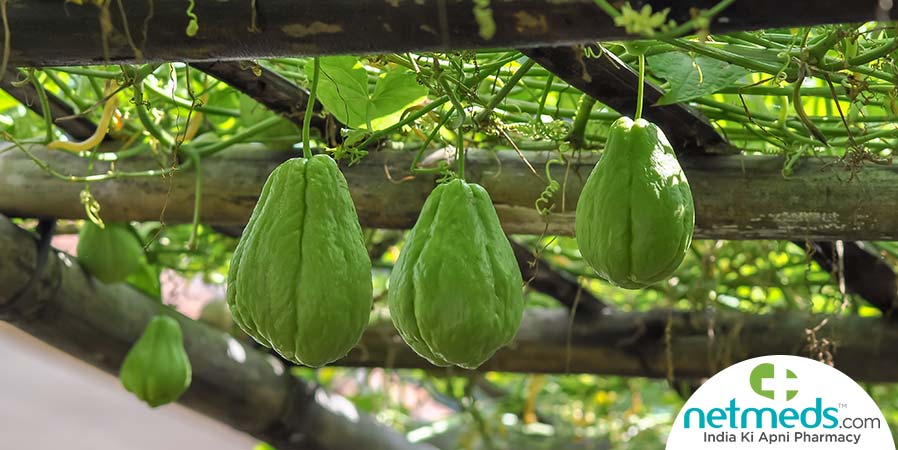 A humble vegetable, Chayote comes with an array of nutritional components. This tender vegetable with deep ridges is not only low on calories but also offers ample amounts of potassium, magnesium, manganese, copper, Vitamins C, K, B6, B9 or folate, Calcium, Iron besides a whopping 2.8 grams of dietary fibre and contains absolutely no fat, sodium making it an ideal vegetable for those on weight loss journey.

Rich in phytochemicals, Chayote plays a major role in improving blood flow, thus regulating high blood pressure. The presence of myricetin, an antioxidant not only brings down the levels of cholesterol but also fights against inflammation, thus preventing chronic cardiovascular diseases. Add this vegetable to your daily diet for protecting the health of your most vital organ, the heart.

A fatty liver is a dangerous condition, and it can happen in non-alcoholics as well. Various studies signal that regular intake of this nutritious vegetable considerably brings down the fatty deposits in liver and also reduces the levels of bad cholesterol of LDL. Regular intake of Chayote triggers metabolic activity improves the liver’s ability in processing fats.

Also Read: Liver Function Tests: Know The Types, How It Is Done And What To Expect

Low on carbs and loaded with dietary fibre, Chayote should be the part of a diabetic’s diet plan. Chayote not only makes you feel satiated for longer hours, but presence of fibre prevents the faster absorption of carbohydrates thus regulating blood sugar levels. Studies reveal that the presence of certain chemical compounds in Chayote improves insulin sensitivity, aids in better control of blood sugar levels in those suffering from type 2 diabetes.

Folate is a primary nutrient any pregnant woman would require in ample amounts for delivering a healthy baby. Also referred as Vitamin B9, folate is in fact recommended to every woman trying to get pregnant as it plays a crucial role in the healthy development of fetal brain, spinal cord and proper growth of the baby. Chayote Squash comes with a whopping amount of 40% of daily recommended intake of folate for a pregnant woman. All you need is one Chayote daily to meet most of your folate requirements.

Chayote Squash is loaded with a wide range of antioxidants including quercetin, myricetin, kaempferol, morin which fight against various chronic conditions including diabetes, cancer, and inflammation. Thanks to the impressive presence of Vitamin C, this super vegetable is your must-have for fighting various bacterial and viral infections that are quite common in rainy and winter seasons.

Chayote, being rich in antioxidants fights against free radicals thus slowing down the progression of cancer cells, especially in those suffering from leukaemia and cervical cancer. The presence of flavonoids in Chayote, not only have anti-cancer activity but restrict the growth of cancer cells and prevent metastasis. These compounds reportedly eliminate oxidant molecules which are responsible for the faster growth of tumours and for these reasons, it is strongly recommended in to the diet chart of the cancer patients.

This super vegetable can effectively reduce oxidative stress, which may have a negative impact on the body cells, thus making skin look dull and pale. Eating Chayote brings down the signs of metabolic syndrome, thus protecting the body from cell damage, making the skin glow from within.

Good For The Gut:

Chayote is your must-have vegetable if you are on a strict diet regimen, hoping to shed those extra kilos. Quite low on calories, it is extremely beneficial for weight watchers and those practicing calorie deficit diet plan. Being rich in dietary fibre it helps in resisting mid-day hunger pangs and in suppressing appetite.

Being rich in antioxidants, flavonoids and other plant compounds Chayote is extremely beneficial in those suffering from cognitive decline. Various studies prove that this vegetable is very effective in bringing down the durations between the episodes of convulsions, improves mood disorders, prevents depression. It is also widely recommended for improving motor coordination in those suffering from Parkinson’s disease and Alzheimer’s.

How To Prepare Chayote?

Botanically speaking, Chayote is a fruit but is cooked as a vegetable. It is very easy to cook this delicious vegetable. Wash Chayote properly and peel the skin. Cut it in to two halves, remove seeds.

Dice it into small cubes or grate it depending on the dish.

Cut into fine pieces and add to your salads

It goes well with fries, add it to the dal and cook

Fry it, sprinkle some salt and serve it as an appetizer

Chayote is available round-the-year in India, making it a staple in our culinary journey. Checkout these very easy, amazingly tasty and nutritious dishes that can be made from Chayote. 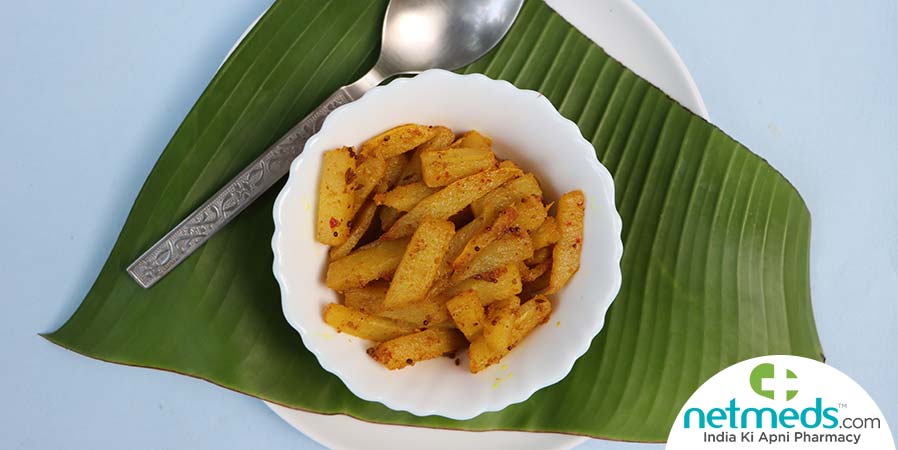 Add onions, garlic and fry till it turns translucent

Stir it, make sure the curry is cooked tender

Serve hot with rice or roti

Chow Chow is rich in vitamin C, folate and provides copious amounts of antioxidants, plant compounds crucial for regulating various bodily functions. Whole spices like mustard, urad and cumin regulate digestion, trigger appetite. Onions are rich in antioxidants that fight against inflammation, bring down the levels of cholesterol and high blood pressure. Garlic is loaded with manganese, selenium and vitamin C which keep your heart healthy and improve cognitive functions. Adding turmeric to this dish brings in antibacterial, antimicrobial and antiviral properties making it an ideal dish to consume in the rainy season. 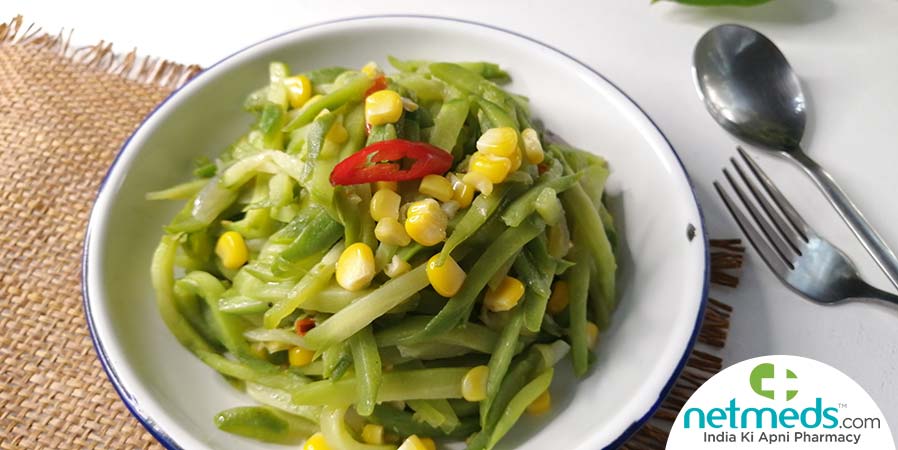 In a bowl, mix olive oil, honey, pepper, salt and lemon juice. Stir it well. The dressing is ready

In another bowl, add thinly sliced Chayote, avocado pulp, cilantro and walnuts. Give it a stir

Add salad dressing to the mix of Chayote and avocado. Mix well

Chayote can be consumed raw just like cucumber and it meets your daily requirement of Vitamin C, boosts immunity and the various plant compounds keep heart healthy. Avocado is your must-have if you are on a weight loss journey, helps bringing in inflammation. Organic honey is a rich source of antioxidants, loaded with antibacterial and antifungal properties that can heal the body from within. Pepper is low on calorie and provides you with vitamins A, C, potassium, folic acid which are responsible for regulating various bodily functions. Olive oil keeps heart healthy, reduces inflammation while lemon juice triggers immunity. Walnuts are known for ability in improving the mood and functioning of the brain.

Side Effects of Chayote:

There are any known side effects of consuming Chayote or Chow-Chow as a part of regular diet. Make sure to clean the vegetable properly before consuming it in the raw or cooked form.

Chayote or Chow Chow is technically a fruit but cooked as a vegetable. Originating from Mexico and Guatemala, Chayote that looks like a big pear, sporting thin skin, goes with the botanical name Sechium edule, is also referred as mirliton, pipinola, choko. Loaded with Vitamin C, potassium, magnesium, manganese, copper, B9 or folate, calcium, iron besides impressive amounts of dietary fibre, Chayote helps in bringing down high blood pressure, improving liver function, preventing cancer, inflammation, reducing the signs of aging. It is an ideal food choice for those on weight loss diet plan as it keeps you satiated for longer hours. There are any known side effects of consuming this super vegetable. 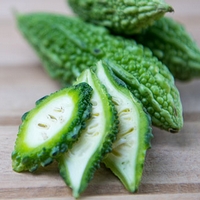 6 Amazing Reasons To Start Eating B..

Bitter Melon, commonly known as Bitter Gourd or Karela in Hindi may not be a fav.. 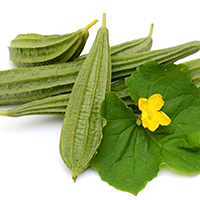 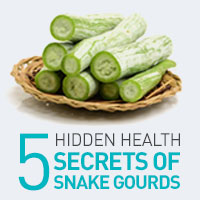 Snake gourd, named thus due to its distinct elongated and coiled appearance with.. 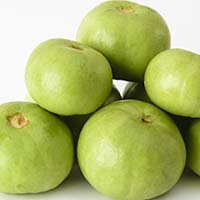 Tinda/Indian Round Gourd: Health Be..