Carpenter Syndrome, medically called acrocephalopolysyndactyly type II, is a very rare genetic disorder present in infants right from birth. It is characterized by disfigured assembly of facial, head and neck muscles, besides obesity and syndactyly – which is an abnormal condition of digits i.e. fingers in the hands and toes in the feet, being fused together. Carpenter syndrome is designated thus, as it was first observed and studied in detail by the renowned British paedeatrician, George Alfred Carpenter, in the year 1909.

Since the signs of craniofacial malformation and odd shape of the skull are evident in babies shortly after birth, surgical treatments to rectify the defects in the head must be carried out before the child completes one year of age. This enables normal brain development and ensures better motor and cognitive skills in the affected infant. 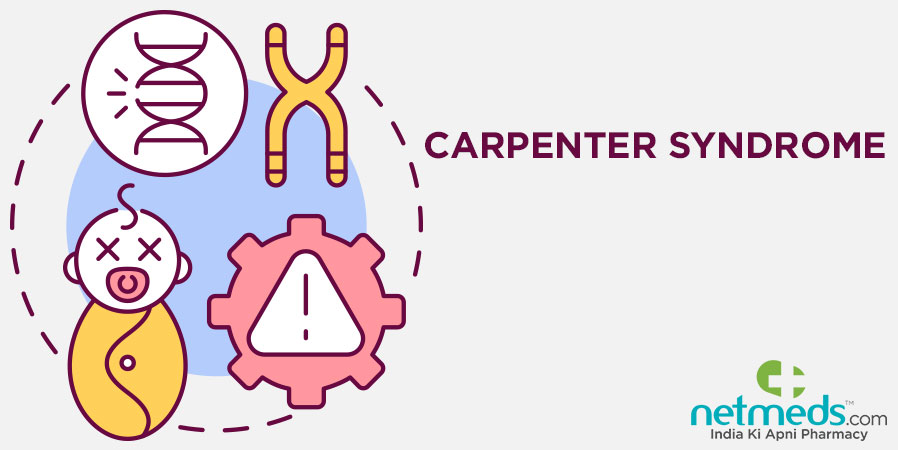 These genetic aberrations are present in both parents, which are passed on to the child in extremely rare situations, hence giving rise to Carpenter syndrome as an inherited autosomal recessive genetic malady. The child is not affected by Carpenter syndrome if only one of the parents carries a faulty gene in their system.

The distinguishing indications of Carpenter syndrome are noticed in the child right from birth and include:

Carpenter syndrome is identified in affected children primarily by means of a thorough external physical examination. The paediatrician analyses the structure of the head in the baby, as early skull closure is a distinct feature of this genetic illness and if it appears pointed, cone-shaped or short and broad, it ascertains a case of Carpenter syndrome.

Furthermore, the doctor studies the appearance of the fingers and toes and looks for signs of fused digits or extra growths, which also signify Carpenter syndrome. In some circumstances, X-rays, CT scans and genetic tests may be conducted to rule out the possibility of other genetic anomalies with similar symptoms. But in most instances, blood tests, X-rays or CT scans are not required for confirming the diagnosis of Carpenter syndrome in the child.

Treatment for Carpenter syndrome chiefly comprises surgery to resolve the skull malformations and heart defects in the newborn. These procedures are generally performed within the first one year of age in the affected child, so as to allow for the normal development of brain and heart with increasing age and prevent further health complications later on.

Children diagnosed with Carpenter syndrome also encounter difficulty moving their limbs – hands and legs, as well as facial muscles, with ease and in a normal manner. Hence, physical therapy and speech therapy are recommended for the affected child to improve hand-eye coordination, mobility and flexibility of the hands, feet and also develop fairly fluent and clear speaking capabilities. In case the child experiences hearing difficulties, then hearing aids are given by the medical professional, to guarantee optimal auditory operations.

Parents and children affected by Carpenter syndrome are advised by their healthcare practitioners to come in for regular follow-up visits and consultations, to monitor the progress of physical and mental growth and development, as well as provide pertinent care and advice to further improve physical, social and behavioural skills in the affected child.