What OVARES PLUS is used for?

OVARES PLUS contains the below mentioned components, which have the following uses:

Talk to your doctor before taking OVARES PLUS, if you:

Tell your doctor before taking OVARES PLUS, if you are taking any other medicine including medicines obtained without prescription or any other supplements or herbal products.

Directions to use
NA 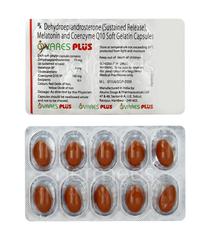