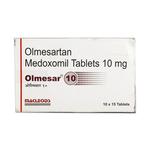 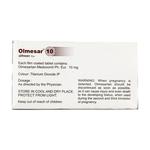 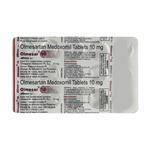 OLMESAR 10MG contains Olmesartan which belongs to the group of medicines called Angiotensin II receptor antagonist. It is used to treat high blood pressure (hypertension) in adults, children, and adolescents (6 years to less than 18 years). Hypertension is a condition in which the force of the blood against the blood vessel walls is too high which is characterized by headache, irregular heartbeat, vision changes, feeling of overtiredness, nausea, vomiting, confusion, anxiety, chest pain

Olmesartan makes blood vessels to relax and thus lowers the blood pressure by blocking the effects of Angiotensin II (a substance produced in your body which causes narrowing of blood vessels). Your doctor may advice you to take regular exercise, such as walking or swimming, low salt diet, giving up smoking and alcohol drinking. It is important to follow this advice from your doctor which helps to reduce blood pressure. Your doctor may check your kidney function, blood pressure, and the amount of electrolytes (Ex. potassium) in your body prior to the treatment or at regular intervals along with the treatment.

OLMESAR 10MG makes blood vessels to relax and thus lowers the blood pressure by blocking the effects of Angiotensin II (substance produced in your body which causes narrowing of blood vessels).

Take OLMESAR 10MG as advised by your physician. Swallow this medicine, do not crush or chew OLMESAR 10MG. Your doctor will decide the correct dose and duration for you depending upon your age, body weight and disease condition.

SIDE EFFECTS OF OLMESAR 10MG

Stop taking OLMESAR 10MG and contact your doctor immediately if you experience any of the following side effects:

Take OLMESAR 10MG with, or just after meals. Stick to simple meals. Avoid eating oil rich or spicy foods, sugary snacks, and drinks. Avoid drinking too much liquid along with your meals, drink slowly in between meals. Consult your doctor if your symptom does not improve.

Drink lots of fluids, such as water or fruit juice to keep yourself hydrated. Do not consume any medicine on your own without consulting your doctor.

Try to rest and relax. Try to have smaller and frequent meals. Keep a heat pad on your stomach. If the symptom does not improve, contact your doctor.

When you feel dizzy, lie, or sit down immediately. if you're experiencing a severe episode of vertigo, lie in a dark and quite place with eyes closed. Vehicle driving should be avoided if you experience frequent dizziness without warning. Talk to your doctor if the symptom worsens.

OLMESAR 10MG is not recommended in early pregnancy and must not be taken when more than 3 months pregnant, as it may cause serious harm to the baby if used after 3 months of pregnancy. Consult your doctor before taking this medicine.

OLMESAR 10MG is not recommended for use in breastfeeding women. Your doctor may choose another treatment especially if you want to breast-feed when your baby is new-born or born prematurely. Consult your doctor for advice before taking this medicine.

OLMESAR 10MG should be taken with caution in patients with kidney problems. Consult your doctor before taking OLMESAR 10MG.

OLMESAR 10MG should be used with caution in patients having liver disease. Consult your doctor before taking OLMESAR 10MG.

OLMESAR 10MG is not recommended for use if you are allergic to Olmesartan.

OLMESAR 10MG should be taken with caution in patients having heart failure, problem with heart valves or heart muscles. Before taking OLMESAR 10MG consult with your doctor.

OLMESAR 10MG is not recommended for use if you:

Before taking OLMESAR 10MG, inform your doctor if you have:

Before taking OLMESAR 10MG, inform your doctor if you are taking any of the following medicine:

If you or anyone else accidentally take too much of OLMESAR 10MG, consult your doctor immediately or visit the nearby hospital. The most common symptoms of overdose are low blood pressure, fast heart rate, low heart rate (bradycardia) if vagal nerve stimulation occurs.

Can OLMESAR 10MG be used to treat high blood pressure?

Can OLMESAR 10MG be given to children and adolescents?

What happens if I stop taking OLMESAR 10MG?

Do not stop taking OLMESAR 10MG without talking to your doctor first. Stopping this medicine suddenly can cause your blood pressure to spike and may increase the risk for heart attack or heart failure.

Can OLMESAR 10MG be taken by patients with kidney problems?

OLMESAR 10MG should be taken with caution in patients with kidney problems. Kindly inform your doctor if you have any existing kidney disease. Your doctor may check the kidney function before prescribing this medicine.

What precautions do I need to follow while taking OLMESAR 10MG?

Patients taking OLMESAR 10MG must inform their doctor about their pre-existing disease conditions like kidney, heart, or liver problems. Consult your doctor immediately if you experience any unusual symptoms after taking OLMESAR 10MG.

Olmesartan TABLET : Therapeutic Uses, Warning and Precautions, Interactions, Directions for Use, Side Effects and Storage 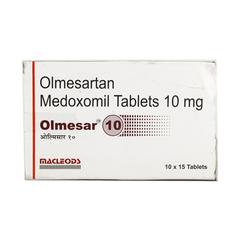