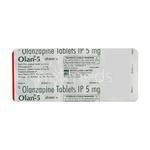 OLAN 5MG TABLET contains Olanzapine which belongs to the group of medicines called Antipsychotics. It is used in the treatment of schizophrenia (hearing, seeing or sensing things which are not there, mistaken beliefs, unusual suspiciousness, may also feel depressed, anxious), moderate to severe manic episodes (symptoms of excitement or euphoria) and to prevent recurrence of these symptoms in patients with bipolar disorder. Bipolar disorder (also called manic depression) is a mental disorder characterized by alternative episodes of mania (sudden unusual and extreme sense of happiness) and depression.

Along with this treatment, your doctor might ask you to make certain lifestyle changes, such as eating a healthy diet, regular exercise and quitting alcohol. Prior to the treatment, your doctor may want you to take several blood tests to understand your existing condition. Avoid consumption of alcohol during treatment with OLAN 5MG TABLET as it can make you feel drowsy.

OLAN 5MG TABLET is not recommended for use in patients previously diagnosed with eye problems like glaucoma or dementia in the elderly. Before taking OLAN 5MG TABLET, inform your doctor if you have history of blood clotting, stroke, Parkinson’s disease, prostate, intestine, heart, liver or kidney disease, diabetes, and seizures.

OLAN 5MG TABLET exerts its action primarily on certain chemical messengers in the nervous system (dopamine and serotonin). It blocks the action of dopamine allowing for normal dopamine neurotransmission which leads to a decrease in positive symptoms in patients like hallucinations, delusions, and disorganized speech, thought, and behavior. It also blocks the action of serotonin, helping in the decrease of negative symptoms like poor speech, being unable to express emotions, low motivation, and poor attention.

For Tablet: Take OLAN 5MG TABLET as advised by your physician. Swallow the medicine with a glass of water. Do not crush or chew the medicine.

For Orally disintegrating tablet: Place OLAN 5MG TABLET inside your mouth and allow it to dissolve completely. Do not swallow or chew the medicine.

Your doctor will decide the correct dose and duration of therapy for you depending upon your age, body weight and disease condition. Continue to take OLAN 5MG TABLET for the stipulated duration prescribed by your doctor to achieve better results.

SIDE EFFECTS OF OLAN 5MG TABLET

Stop taking OLAN 5MG TABLET and contact your doctor immediately if you experience any of the following side effects:

OLAN 5MG TABLET should be used with caution in pregnant women. Consult your doctor before taking it.

OLAN 5MG TABLET is not recommended for use in breastfeeding women as it can pass through breast milk. Consult your doctor before taking it.

Do not drive and use machines while taking OLAN 5MG TABLET as it can make you feel drowsy.

Do not drink alcohol while taking OLAN 5MG TABLET as it can make you feel drowsy.

Do not take OLAN 5MG TABLET if you are allergic to Olanzapine.

OLAN 5MG TABLET is not recommended for use if you:

Before taking OLAN 5MG TABLET, inform your doctor if you:

OLAN 5MG TABLET should be used with caution in elderly patients. Your doctor will decide the correct dose and duration for you depending upon your age, body weight and disease condition. Consult your doctor before taking OLAN 5MG TABLET.

Before taking OLAN 5MG TABLET, inform your doctor if you are taking any of the following medicine:

If you or anyone else accidentally take too much of OLAN 5MG TABLET, consult your doctor immediately or visit the nearby hospital. Symptoms of overdose are rapid beating of the heart, agitation, problems with speech, unusual movements (especially of the face or tongue), reduced level of consciousness, acute confusion, seizures, and coma.

Is it safe to drink alcohol while taking OLAN 5MG TABLET?

Yes, one should avoid alcohol while taking OLAN 5MG TABLET since it may cause more drowsiness.

No, OLAN 5MG TABLET is an antipsychotic used to treat schizophrenia and bipolar disorder (manic depressive disorder). It causes episodes of depression, mania, and other abnormal moods.

Can OLAN 5MG TABLET be taken during pregnancy?

OLAN 5MG TABLET should be avoided during pregnancy and should only be given if benefits outweigh the risk. Using it in last 3 months of pregnancy may cause unwanted symptoms in the unborn baby like shaking, muscle stiffness and/or weakness, sleepiness, agitation, breathing problems, and difficulty in feeding. 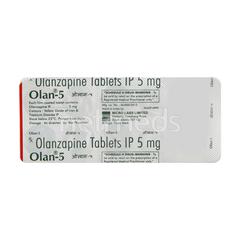