What is Arrhythmia And How Is It Treated?

The heart normally beats at regular intervals and when it beats at irregular intervals, it is termed arrhythmia. The heartbeat is controlled by a remarkable electrical system. An electrical signal starts at the top of the heart (in an area called the sinoatrial node). As the signal travels down, it causes the upper part of the heart (atria) to squeeze and pump blood.

As the signal continues to the bottom of the heart it causes the lower part of the heart (ventricles) to squeeze and pump the blood. In a healthy heart, the signal usually fires 60 to 100 times every minute. If the heart beats at a speed more than 100 per minute, it is known as Tachycardia. When the heart rate is less than 60 beats per minute it is referred to as Bradycardia. 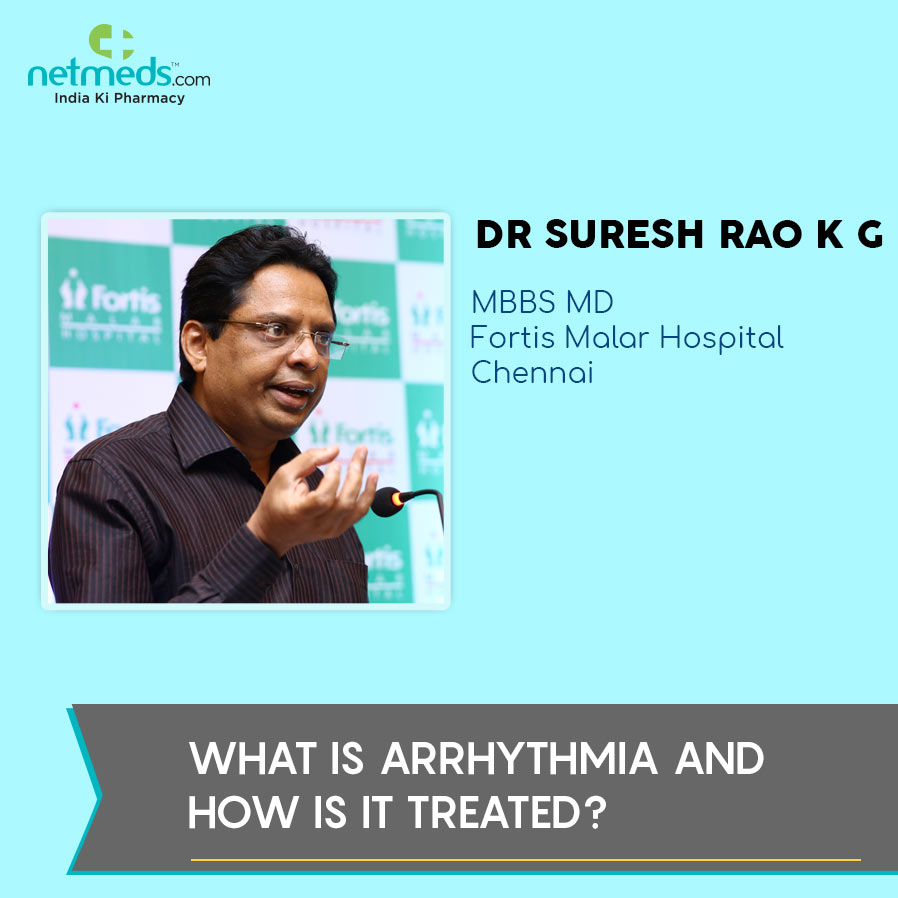 When the heart rhythm is too slow, the heart loses the ability to pump enough blood to supply the body. A fast heart rate after exercise is normal, but when resting, if the heart rate is faster than normal then it could be because of tachycardia.

Arrhythmias could be caused due the break down or malfunction of the heart's electrical system. Sometimes cells within the heart can malfunction and send out electrical signal which could interfere with the proper signals from the heart's natural pacemaker and confuse the heart, leading to irregular heartbeats.

Sometimes the electrical signal could be blocked and may not reach the main pumping chambers of the heart which results in slow heartbeat. The heart's electrical signal might commence at the right place and time but get interrupted and not follow its normal path which can also cause arrhythmia. This may be a symptom of underlying coronary heart disease or other medical problems. Other causes include coronary artery disease, heart valve disease, thyroid problems, electrolyte imbalances, substances like nicotine, caffeine and medicines such as beta blockers, alcohol and cocaine.

The most common symptoms of arrhythmia are chest pain, dizziness, sweating continuously, breathing problem, chest pain, skip of a heart beat or fast and slow heartbeat. All arrhythmias might not have symptoms. A short arrhythmia might not show any symptoms but if it lasts for a long time, it means the heart probably isn’t pumping enough blood to the body and one of the above-mentioned symptoms could be felt. Occasionally patients may become unconscious.

There are various ways through which an arrhythmia can be diagnosed. The most common test is the Electrocardiography (ECG) which shows how electrical system in the heart is working. ECG can be performed in several different ways.

When arrhythmias happen occasionally, ECG may not show the presence of arrhythmia if the patient had normal rhythm at the time of ECG.

In such cases we advise Holter monitoring device wherein a 24 hours continuous ECG is monitored. It will indicate all the arrhythmias present during the 24-hour period. Some patients may require Electrophysiological [EP] studies to evaluate the arrhythmias. Whenever a patient with cardiac symptoms is presented, arrhythmia needs to be considered. If arrhythmia is present, we need to find the type and cause of arrhythmia. It is important to treat both the causes of arrhythmia and the arrhythmia as well.

The most common treatments for arrhythmia are vagal manoeuvres-action and cardio version which is used for restoring the normal heartbeat. Drugs like calcium channel blocker, beta blocker, anti-arrhythmia drug and anticoagulants relax the blood vessels and help in increasing oxygen and blood supply to the heart.

Other treatments include Catheter ablation, a minimally invasive procedure that can be used for removing electrical pathway from sections of heart and ICD {Implantable Cardio vector defibrillator} device or pacemaker which helps control heart rhythm. Children who are affected by arrhythmia are treated using drugs partially, and treatments like pacemaker, radiofrequency ablation are also done. Surgery is conducted in a few rare cases.