A recent study published in journal Evolution and Human Behavior, revealed that, grandparents, who care and help their grandchildren in their day-to-day life, live longer than other senior citizens. 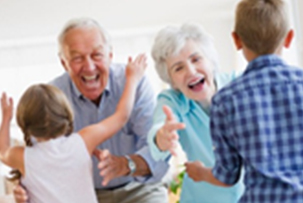 The study conducted in Germany showed that grandparents who had regular interaction and contact with their grandchildren, children or other neighbors had an increase in the lifespan by ten years.  Having no contact with grandchildren showed to have a negative impact on the health of the grandparents.

The study conducted on seniors who were above 70 years of age showed that helping their grandchildren or children occasionally, in their daily activities proved to be beneficial. But, a full-time custody of the grandchildren proved to have a negative impact on the mental and physical health.

The same study was also true in case of people who did not have grandchildren but supported and cared for their children and grandchildren of their neighbours in their daily activities. In contrary, the participant who did not help anyone lived only for 4 years when compared to those who helped others, lived for 7 years.

Hence, care giving may be an activity to keep oneself physically and mentally fit which improves the cognitive functioning, physical and mental health of the person.