Fabry Disease, also termed as Anderson-Fabry Disease, is a rare genetic disorder that hampers the functioning of many key internal organs in the body such as the heart, kidneys, brain, eyes and skin. This grave ailment, which is passed on from parents carrying the faulty galactosidase alpha (GLA) gene to the child, is characterised by insufficient and aberrant synthesis of the alpha-galactosidase enzyme (alpha-GAL). Alpha-galactosidase is required by the cells to break down a particular type of fat called sphingolipids and when this fails to take place, excess fats accumulate in the blood vessels and deep tissues, increasing the chances of developing heart disease, stroke and kidney failure. 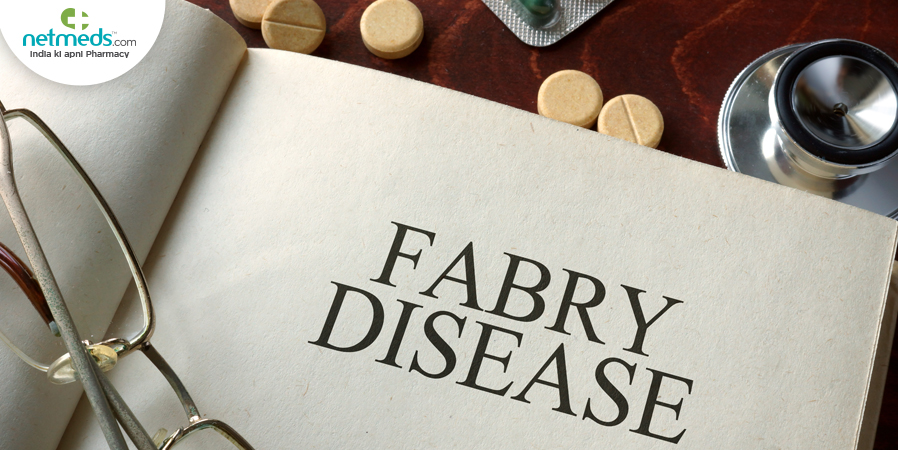 Since this genetic condition was first identified by renowned German dermatologist Johannes Fabry and a reputed surgeon from England William Anderson in the year 1898, it is designated eponymously as Fabry-Anderson disease. There are two types of Fabry disease based on the age at which the onset of the malady happens in the person. The two forms of Fabry disease are:

In this type, the symptoms of Fabry disease lead by burning feelings in the hands and feet first appear in childhood - seen in kids as young as 2 years old, or in adolescence - being reported by teenagers. The intensity of the discomforting indications exacerbates with increasing age.

In some people, Fabry disease initially manifests only in adulthood, until the age of 30 and above, with prominent symptoms like kidney disease and heart failure signifying genetic and enzymatic abnormalities.

Fabry disease is a genetic illness wherein the abnormal galactosidase alpha (GLA) gene on the X chromosome of the parent is inherited by the child. Thus, children with the malformed GLA gene do not produce sufficient amounts of the healthy alpha-galactosidase enzyme. This invariably results in massive levels of sphingolipids and other fatty substances building up in the blood vessels and interior tissues.

The distinguishing signs of Fabry disease can be mild, moderate or severe, with symptoms being more painful in males than in females and comprise:

It is crucial to report these symptoms promptly to a doctor, for a proper diagnosis and timely treatment of Fabry disease. If left unattended, the vast quantities of sphingolipids accruing in the blood vessels and deep tissues give rise to serious health complications of heart attacks, peripheral neuropathy, kidney failure and stroke.

Fabry disease is detected in children and adults using the following methods:

This procedure measures the amounts of alpha-GAL enzymes present in the blood of the patient and is used solely to investigate the instance of Fabry disease in males. The enzyme assay is not recommended to be used for diagnosing Fabry disease in females. If the test results indicate enzyme levels of 1 percent or lower, it implies that the male patient has Fabry disease.

In females with Fabry disease, the levels of alpha-galactosidase enzyme can still be normal and hence the enzyme assay is not a conclusive tool to confirm the instance of the genetic disorder. Therefore, genetic testing is utilised wherein DNA sequencing is performed to spot the galactosidase alpha (GLA) gene mutations present in the system.

Fabry disease is a chronic disorder arising from inherited genetic defects that does not have a cure. However, treatment measures help to lessen pain, prevent the build-up of fats in blood vessels and avert the risk of heart failure, stroke, kidney disease and other life-threatening complications. The two treatment methods employed for patients with Fabry disease are:

Enzyme replacement therapy involves intravenous injections of enzyme infusions, which carry out the roles and functions of the missing alpha-galactosidase enzymes, thereby ensuring proper breakdown of sphingolipids. This prevents the accumulation of fats in blood vessels and tissues and stops any grave health issues of the heart, kidneys or brain from developing in the patient.

Chaperones are specialized molecules that repair the defects in enzymes, including alpha-galactosidase. Oral chaperone therapy entails taking prescription pills orally on a regular basis, which are given by the doctor to correct the faults in the alpha-GAL enzymes and hence restore proper breakdown of fats in the body.

These treatment measures help to alleviate the symptoms of Fabry disease in the patient and avert any serious health problems.