Dumping syndrome refers to a condition in which the stomach carries forward its components like food particles – mainly sugars and peptic acids into the small intestine swiftly - at a pace much quicker than normal. Also known as rapid gastric emptying, dumping syndrome occurs commonly in individuals who have recently undergone gastrointestinal surgery. These include gastric bypass - creating a stomach-like pouch smaller than the stomach to control eating habits, appetite and esophagectomy – wherein either a part or whole of the esophagus i.e. food pipe that runs from the throat to the stomach is removed. 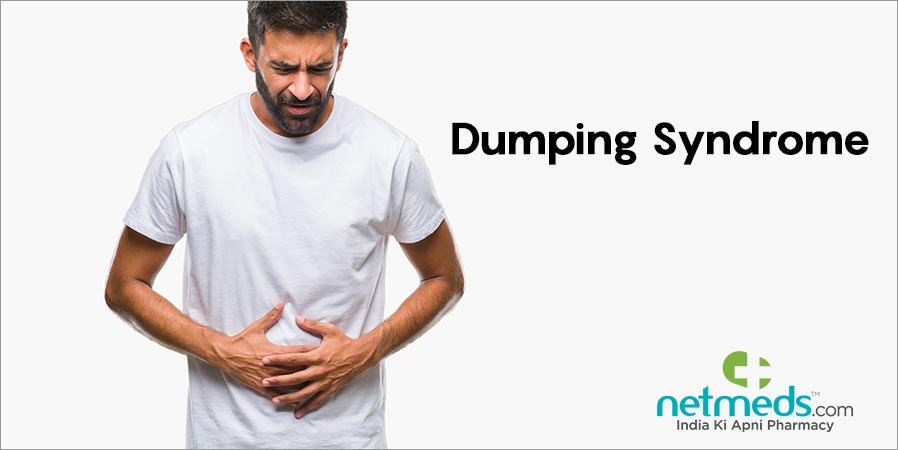 In a normal, healthy individual, once food is partially digested in the stomach, it traverses down to the first segment of the small intestine known as the duodenum. Here, the digestive juices secreted by the intestines, pancreas, liver act on the food particles, facilitating their further breakdown and move the mixture into the large intestine for complete digestion. This phase of digestion usually takes place 6 – 8 hours after eating meals. However, in people with dumping syndrome, food traverses from the stomach to the small intestine rather quickly, giving rise to symptoms of nausea, abdominal cramps, diarrhoea.

While in minor instances, dumping syndrome can be managed with dietary modifications, severe cases require surgical protocols to rectify the defects in the gut. It is hence crucial to report any signs of dumping syndrome at once to a doctor, to ensure prompt medical treatment and restore optimal digestive functions in the patient.

The primary reason for dumping syndrome is the fast movement of partially digested foods, as well as stomach acids and sugars from the stomach to the duodenum. This happens due to surgical procedures such as gastrectomy, gastric bypass, esophagectomy.

Dumping syndrome arises in people with pre-existing gastrointestinal problems such as functional dyspepsia – in which the upper digestive tract continuously moves food past the stomach, as well as nerve damage in the gut post esophageal surgery.

The doctor initially analyses the patient’s medical history, to record any gastrointestinal surgeries they may have undergone recently, as well as any other underlying conditions like functional dyspepsia, obesity that they may be enduring. The physician also takes note of the signs and symptoms exhibited by the patient, to gauge the extent of digestive complaints like nausea, bloating, besides the intensity of pain and discomfort in the abdomen.

A blood sugar test is also carried out, to determine if the patient has hypoglycemia. The healthcare provider then conducts a gastric emptying test, in which a radioactive material is tagged on to food, which is then ingested, to measure the speed at which food particles passage through the stomach and into the intestines.

The signs of early dumping syndrome tend to resolve on their own in 2 – 3 months post surgery. The doctor advises the patient to adhere to certain dietary modifications, such as consuming meals of small portion sizes, drinking 6 – 8 glasses of water/fluids per day, increasing dietary fibre and protein intake, aside from steering clear of high-sugar foods, packaged juices, aerated drinks. These help to alleviate uneasy symptoms of nausea, bloating, vomiting, flushing, diarrhoea and promote gut health.

However, in some cases, symptoms do not subside with merely diet changes and in these situations, prescription medications and surgery are recommended to treat the instance of dumping syndrome. The medical professional prescribes anti-diarrheal drugs and carries out reconstructive surgical procedures to adjust the structures of the stomach, so as to ensure normal speed of food passage to the intestines. These help to restore healthy digestive functions in the patient.