Behcet’s Disease is a rare ailment characterised by vasculitis i.e. inflammation of the blood vessels – the arteries and veins. It is also referred to as Silk Road Disease, as it occurred more frequently with rather severe symptoms in people hailing from countries situated along the Silk Road – the ancient trade route that extended from China, Japan, South Korea, India via the Middle East Gulf countries, Iran in Asia, right up to the Mediterranean European nations of Turkey, Italy, Greece. While Silk Road Disease is the common name of this disorder, Behcet’s disease is the medical term used to denote this condition, designated after the renowned Turkish dermatologist and scientist Hulusi Behcet, who first identified the symptoms in his patients in 1924 and documented the malady in the Journal Of Skin And Venereal Diseases in 1936.

While Behcet’s disease afflicts both males and females, more so in the Mediterranean and East Asian regions but also at times in other parts of the world, it is more likely to arise in men than in women. Furthermore, the onset of this inflammatory disease happens predominantly in people between the ages of 20 – 40 years. Although Silk Road disease is a chronic condition that lasts through life and has no cure, consulting with a doctor as soon as symptoms develop to ensure accurate diagnosis and timely treatment help in effectively managing this illness. 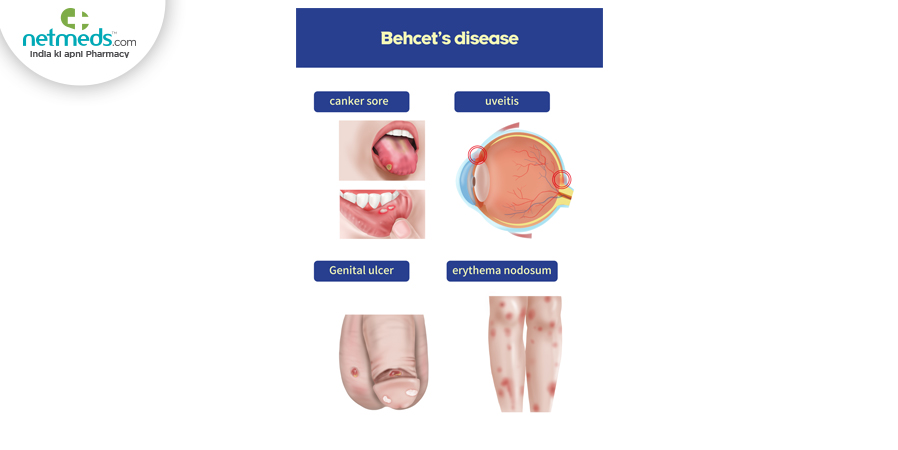 The exact cause of Behcet’s disease is not yet known, however doctors, medical experts and researchers have established that genetic and environmental factors are what trigger this chronic inflammatory disorder.

The specific genes HLA-B5 and HLA-B51 (HLA - Human Leukocyte Antigen) are found to be prominently expressed in people with Behcet’s disease. These HLA gene markers help the individual in distinguishing the body’s own blood cells from foreign invaders and thus defects in these genetic components that happen in Behcet’s disease induce an autoimmune response. One reason for Silk Road disease could thus be due to the body’s immune cells attacking its own blood vessels – arteries and veins, leading to vast levels of tissue damage and inflammation.

Behcet’s disease also develops in people who have had grave bacterial and viral infections, wherein environmental aspects of pathogenic microbes being present in blood lead to inflammatory reactions and chronic blood vessel injury.

A specific laboratory assay to detect Behcet’s disease is not available, since it is quite a rare condition and the pathology of the chronic inflammatory sickness is not fully understood. The physician analyses the symptoms displayed by the patient, enquires about the frequency of bodily signs - if they subside and then appear again more than or at least 3 times in one year.

The medical practitioner assesses the patient’s system for any oral/mouth ulcers, genital sores, eye inflammation, skin issues and joint weakness. Following this, a pathergy test is carried out, wherein the healthcare provider pricks the patient’s skin to observe if any red bumps form post a few days of the procedure. This diagnostic protocol measures the functionality of the immune system and helps determine the extent of inflammation in the body.

The doctor also conducts a blood test, to rule out the possibility of other inflammatory disorders like Crohn’s disease, systemic lupus and different forms of vasculitis and conclusively establish the instance of Behcet’s disease in the patient.

Behcet’s disease does not have any cure, but the symptoms can be dealt with by means of prescription medications.

The doctor prescribes steroids and immunosuppressants to be taken orally, which aid in controlling immune reactions and diminish inflammation in the blood vessels. In severe cases of Behcet’s disease, immunosuppressant drugs are administered via injections by the physician to the patient, to regulate immune system functions and lessen inflammation in the body. Topical use of eye drops and skin ointments are also prescribed by the medical practitioner, to soothe eye pain, redness, as well as swelling, irritation in the skin.