Hypertension (HTN) - one of the leading risk factor for heart disease and stroke and a major contributor to global mortality and disability. Annually, approximately over ten million deaths are attributable to hypertension across the globe. The low- and middle-income countries bear disproportionately higher burden of hypertension in absolute numbers due to a rapid increase in prevalence and the sheer size of its population. The incremental burden of hypertension in these countries is attributed to the rising population level mean blood pressure (BP) especially in the South Asian and sub- Saharan population.

Despite progress in recent decades in prevention, early detection, and treatment of high BP, hypertension remains an important global public health challenge. Hypertension is said to be a disease of paradoxes which means it is easy to detect but diagnosis rates are dismal, easy to treat but treatment rates are disappointing and several potent drugs are available but control rates are abysmal. Moreover the treatment and control rates of hypertension are abysmally poor at the population level especially in low and middle income nations.

Reducing the population level BP is an effective strategy in addressing the burden of hypertension. Although, taking medicine is effective in reducing BP in the hypertensive group, its impact on population mean BP reduction is limited. Primordial and primary prevention are key strategies for population-wide reduction in average BP.

For example, more than half of the reduction in heart disease and stroke mortality in developed countries is attributed to improvements in population level risk factors such as tobacco use, cholesterol, and BP control.

The Need For Primay Prevention Of Hypertension In India

Data on annual incidence of hypertension in Indian population are scarce. In a longitudinal follow-up study conducted in a representative sample from two cities of India (Delhi and Chennai), the average BP increased by 2.6 mm Hg and one in six developed hypertension. The estimated impact of 2.6 mm Hg rise in average BP on hypertension prevalence is large as it could double the current prevalence rate of 30% over a period of 10 years.

The most susceptible group to develop hypertension is the least privileged, lesser educated, and from the lowest socioeconomic strata. This will have important ramifications at the population level, due to lesser likelihood of treatment affordability. Additionally, there is a tendency to ignore treatment options among the above mentioned group due to asymptomatic nature of hypertension and could potentially lead to devastating health consequences. The impact of a major cardiovascular event due to uncontrolled hypertension on household economy is substantial as it takes away potentially productive life years and probable bankruptcy due to huge out of pocket payments for treatment. 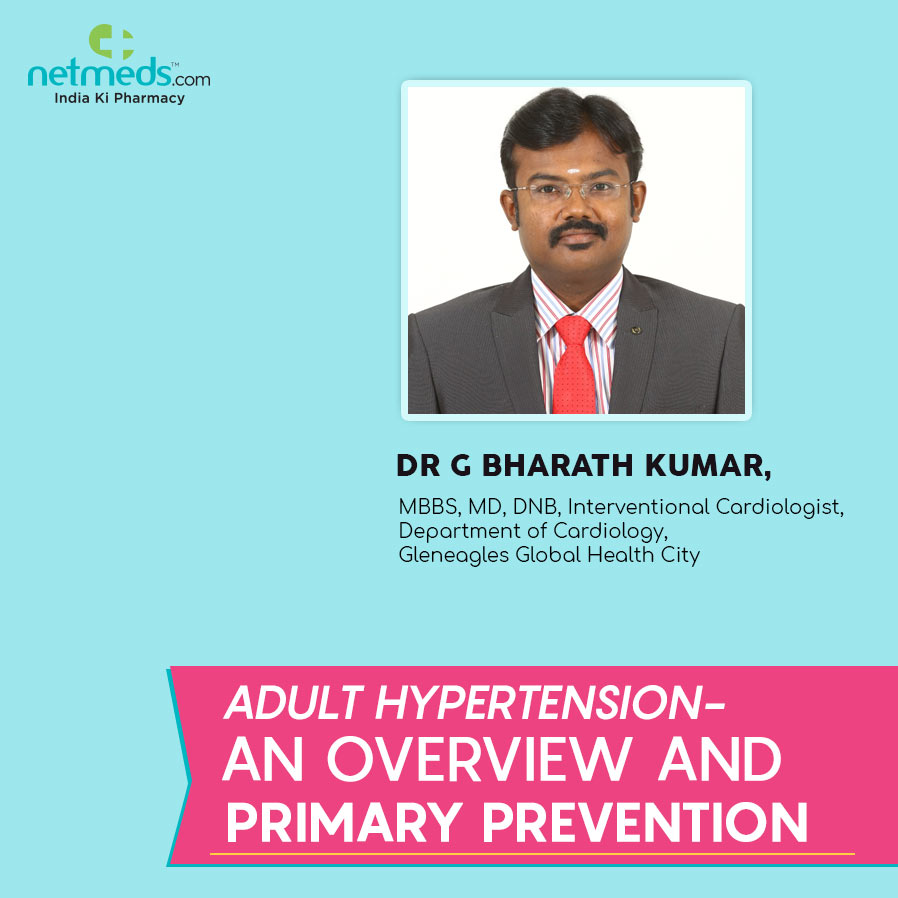 Higher risk older adults are more likely to be successful with lifestyle interventions than young adults with lower risk. However, prevention strategies targeted earlier in life for overall risk reduction and burden of BP-related complications in the community.

Interventions for Primary Prevention of HTN and the key strategies for primary prevention of hypertension are:

Salt reduction is unequivocally the most efficient primary prevention intervention at the population level for hypertension. On an average, 1.7 g/day reduction of average salt intake may result in 2 mm Hg reduction in BP.
No more than 6 g sodium chloride (just under a teaspoon of salt) is generally recommended as daily dietary intake. Lower intake of salt reduces the risk of heart attack and stroke, especially in those who are also overweight.

Weight gain is associated with increased risk of HTN, shown in many population based studies. A sustained weight loss of 4.4 kg or more can reduce BP by 5.0 - 7.0 mm Hg.

The relationship between high alcohol intake (three or more drinks per day) and elevated BP has been documented in many epidemiologic studies. A dose-dependent reduction in BP with reduction in alcohol consumption is reported in individuals who consume alcohol on a regular basis. Isolated binge drinking (consuming more than four drinks in a row per occasion), a form of drinking associated with increased risk of heart disease, is very common in Indians and it is extremely harmful.

Inverse relationship between physical activity levels and BP has been reported from several epidemiological studies. Regular aerobic physical activity for at least 30 min/day for at least 5 days of the week has been recommended for primary prevention of hypertension. Simple interventions such interruption of prolonged sitting time is also found to be effective in reducing BP.

The diet which is rich in fruits, vegetables, dietary, and soluble fibre, and low-fat dairy products but reduced in saturated and total fat is demonstrated to be effective in reducing mean BP in both hypertensive and normal individuals.

Clinical trials data suggest that comprehensive lifestyle modification interventions are effective in bringing down both Systolic and Diastolic BP.

Comprehensive lifestyle interventions have high potential of shifting the population distribution of BP towards the normal and healthy range. The positive lifestyle changes for prevention of hypertension can be sustained over long periods. The BP-lowering effects of positive lifestyle changes observed is almost equivalent to the effect size observed in some of the drug trials in hypertension. Despite several barriers to implementation, potential for health benefits makes primary prevention of hypertension an important national priority in India.